ISLAMABAD, Pakistan (CNN) -- Six years ago an ad in the Sunday paper changed a young Pakistani woman's life and made aviation history. 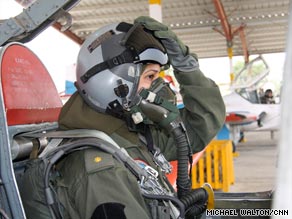 Seven Pakistani women are trained to fly the country's F-7 fighter jets -- though none have seen combat so far.

Back then Ambreen Gul was 20-years old and living in Karachi. Her mother wanted her to be a doctor. She remembers her reaction when she told her she wants to fly.

The following day Gul took the first step in proving her mother wrong. She was among the first in line at the recruitment center.

For nearly six decades it was only men who had flown Pakistan's fighter jets. Today Gul is one of seven women who are trained and ready to fly Pakistan's F-7 supersonic fighter jets.

"This is a feeling that makes you proud and makes you humble also," says Gul.

"We can do everything better than the men," explains cadet Nida Tariq.

To become a fighter pilot takes three years of training at the Air Force Academy in Risalpur, Pakistan, where the halls are lined with grainy black-and-white pictures of nearly six decades of male graduates who went on to fly for the Pakistan Air Force.

If they are not good enough as per their male counterparts, we don't let them fly," says commanding officer Tanvir Piracha.

Some of Pakistan's female pilots wear hijabs. Others prefer to go without the Muslim headdress. Most say changing the misconception of Muslim women is just as important as serving their country.

"Islam gives equal opportunity to females. Whatever we want to do we can," says pilot Nadia Gul.

"To tell you the truth I've been given equal opportunity or I suppose more than men have been given," says Air Force cadet Sharista Beg.

Air Force officials say fighter pilots are playing a vital role in the fight against the Taliban. They're training in counterinsurgency, collecting aerial intelligence and targeting militant strongholds in the treacherous mountains of Pakistan's tribal region along the Afghan border. Ambreen Gul says her goal now is to fly in combat.

"I would give my life for my country," she says.

But women rarely fly in combat anywhere in the world and it's never been done in Pakistan. It's another barrier Gul plans to break.