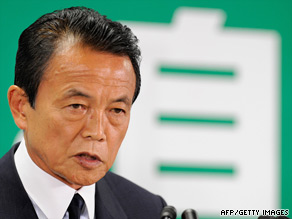 But voters -- skeptical, pessimistic and impatient -- are unlikely to give the DPJ, which has never held office, much time to make good on its promises to move the country forward.

Hatoyama touted a Barack Obama-style message of change. He pledged to raise the minimum wage and discourage hiring through agencies or on temporary contracts.

Hatoyama's party has adopted a salvation plan based on "trickle up economics." It wants to put money in the hands of families, in hopes that they will spend it in Japan and stimulate the world's second-largest economy.

Though Japan officially rebounded from its recession in mid-August, Japanese households have yet to feel secure about a lasting economic recovery. In its election manifesto, the DPJ said it will pay about $3,000 per child to each family every year -- to encourage women to have babies and reverse the country's rapidly aging and shrinking population. It will also pay about $1,000 a month to each unemployed Japanese as he looks for a job.

Watch report on why voters are looking for change »

But the question is, where will the money come from? Japan's budget deficit is enormous. Its national debt is almost two times its gross domestic product.

The DPJ says the money is there, tied up in the corruption and bureaucracy of decades-long LDP rule.