(CNN) -- An Australian man has been arrested for allegedly fathering four children with a daughter he repeatedly raped for more than 30 years, local media reported Thursday. 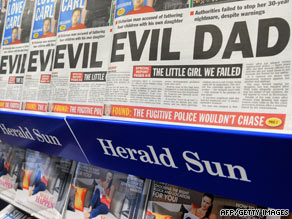 A display outside a Melbourne shop on Thursday shows rows of The Herald-Sun with its headline story.

The man, in his 60s, began the abuse in the 1970s when the daughter was 11 and continued almost daily until 2007, said the Herald Sun newspaper, which first reported the case.

The assaults resulted in four children, all with birth defects, the paper said. One later died.

Authorities in the southeastern state of Victoria would not confirm details of the case to CNN, citing an overarching court gag order that bars the release of any information that may identify the man.

A clerk with the Melbourne County Court would say only that the man was arrested on charges of rape and incest.

"As a parent, this is just a horrific and appalling story," she said. "Court proceedings and a very broad suppression order make it impossible to go to the specifics of the story," she said.

The case has created a stir in the country, with many comparing it to that of Josef Fritzl, the 73-year-old Austrian man who kept his daughter imprisoned in a basement for 24 years and fathered seven children with her.

Local media outlets have also compared it to the recent case of Jaycee Lee Dugard, who was kidnapped from South Lake Tahoe in California at age 11, kept a prisoner for 18 years, and bore two children with her captor.

The suspect in the Australia case denied raping his daughter, but was arrested after DNA tests revealed otherwise, the newspaper said.

The alleged victim's mother told the newspaper she was unaware of the abuse, despite living in the same house.

"We lived in a big house, so I wouldn't have known," she said.

She said her daughter was vague about who fathered the children.

"She used to say something about going out to nightclubs and meeting a fella, but then she would clam up," the mother told the newspaper.

The newspaper said the victim, now in her 40s, first reported the abuse to authorities in 2005 at the urging of a neighbor, but then refused to cooperate because she feared for her safety.

She came forward again in June 2008, after which authorities conducted the DNA tests on her father.

The man was arrested in February, but someone tipped off the newspaper to the case only recently.

The woman and her three children were taken to a safe house.

Another neighbor told the Herald Sun she had her suspicions about the father but did not want to interfere.

"I didn't go to anybody, because it wasn't anybody's business," she told the paper.

She added that the woman who encouraged the victim to contact police "has always been a busybody."

CNN's Tess Eastment and Saeed Ahmed contributed to this report.

All About Australia • Josef Fritzl