ROME, Italy (CNN) -- Italian Prime Minister Silvio Berlusconi said it would be "best" for the country's troops to leave Afghanistan as soon as possible after six were killed in a car bombing in Kabul. 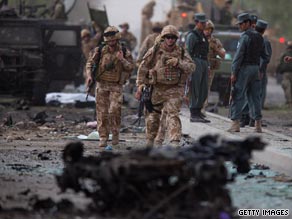 Berlusconi, speaking to reporters Thursday, gave no timeline for a withdrawal and said any pullout would have to be coordinated with Italy's allies.

"There is no idea," Berlusconi said about a possible date for leaving Afghanistan. "It is an international problem. It is not a problem that a country present there can take on its own. Doing so could betray the accord and trust of the other countries present."

However, the 500 troops Italy sent to Afghanistan this summer will be home by Christmas, Italian Defense Minister Ignazio La Russa said Friday. The troops were sent ahead of the Afghan presidential election August 20.

The rest of the nation's 2,800 troops in Afghanistan will withdraw only when NATO calls for it, La Russa said.

Ten Afghan civilians were killed along with the paratroopers Thursday and about 50 people were wounded, NATO said.

Italian newspapers labeled the soldiers' death a "slaughter," with at least four major papers using that word in their headlines Friday. "The slaughter of the Italians shakes Italy," declared the national newspaper Corriere della Sera.

The soldiers' pictures were shown in newspapers and on television.

The deaths were the highest single-day death toll for Italy in the Afghan mission. They bring to 21 the number of Italian troops killed there since the start of the mission, though not all the deaths were due to hostilities.

Most of Italy's troops in Afghanistan are based in the western province of Herat.

"We are all convinced that the best thing for all of them is to leave soon, to no longer have a presence there," Berlusconi said in Brussels, Belgium. "I've spoken with [U.S. President Barack] Obama during the G-8 and we are preparing a plan which could be enacted as soon as our training of the Afghan forces is carried out successfully."

But in a speech delivered to the UK think tank, Policy Exchange in London on Thursday, the chief of U.S. Central Command, Gen. David Petraeus said of Afghanistan: "We need to be realistic in recognizing that the campaign will require a sustained, substantial commitment."

Meanwhile, military officials said Friday that two service members with the NATO-led forces in Afghanistan were killed after being struck by a roadside bomb.

One was identified as a U.S. service member. The other victim's nationality was not released.

The U.S. service member died Thursday when his patrol was struck in southern Afghanistan, said the International Security Assistance Force, known as ISAF. No other details were immediately available.

"He gave his life to bring much needed security and stability to Afghanistan, and in this crucial role, he contributed splendidly," said Brig. Gen. Eric Tremblay, ISAF spokesman. "We will not forget his immense sacrifice."

The other victim also died in fighting in southern Afghanistan, Tremblay said.

All About Afghanistan • Italy • Silvio Berlusconi