(CNN) -- The Taliban fight against American and NATO troops in Afghanistan "is forging ahead like a powerful flood," according to a purported online message posted Saturday by the Taliban's elusive leader, Mullah Mohammed Omar. 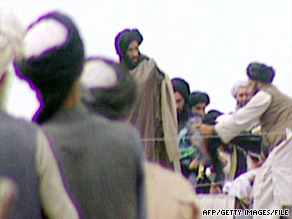 A message from Mullah Mohammed Omar, seen here in 1996, appears on a Web site the Taliban frequently uses.

"Anyone who opts to resist it will himself be washed away. Atrocity, torture, brutality, conspiracies, coalitions, the foreign forces and mercenaries could not hurl stumbling blocks in the way of this robust Jihadic movement," Omar adds in the written message.

The fight against foreign forces "is approaching the edge of victory," according to Omar.

"Our goal is to gain independence of the country and establish a just Islamic system there on the basis of the aspirations of the Muslim nation. We can consider any option that could lead to the achievement of this goal."

CNN was unable to independently verify the authenticity of the report, which appears in English and Pashtun on a Web site frequently used by the Taliban. However, a Taliban spokesman said the message is authentic.

Watch a report on the message from Kabul, Afghanistan »

When contacted by CNN, the U.S. State Department said it had no direct response to Omar's comments, which take a swipe at President Obama.

"We would like to say, we are victims of the black propaganda of the enemy media. This has created doubts between us and a number of countries of the world. They have wrongly depicted us as a force being against education and women's rights. They also accuse us of our being a threat to the countries of the world," Omar wrote.

"The Islamic Emirate of Afghanistan calls on the public of the West not to be deceived by the assertions of Obama, who says the war in Afghanistan is a war of necessity. The West does not have to wage this war. This war, in fact, started for clandestine motives under baseless reasons.

"The humanity, as a whole, suffers from its negative consequences. The global economic meltdown, instability, lack of trust and violation of international norms is the outcome of the baseless policies [of this war]."

With 48 deaths, August was the deadliest month for U.S. service members in Afghanistan since the mission began in late 2001. The United States now has about 62,000 U.S. troops there, and NATO allies have another 35,000. The Pentagon plans to add 6,000 troops by the end of the year.

"We would like to point out that we fought against the British invaders for 80 years, from 1839 to 1919, and ultimately got independence by defeating Britain," Omar says.

He advises Western nations to go back even further in Afghanistan's history to study the period of Alexander the Great, who suffered severe losses when his army invaded the country in the fourth century.

"Today we have strong determination, military training and effective weapons. Still more, we have preparedness for a long war, and the regional situation is in our favor. Therefore, we will continue to wage Jihad until we gain independence and force the invaders to pull out," the leader says.

He urges the mujahedeen fighting the foreign forces to focus on the "Islamic education of the masses, so that they would voluntarily participate in Jihad in person and by wealth."

In July, CNN obtained a new Taliban military "code of conduct" document, which called for restrictions on suicide attacks as well as avoiding the killing of civilians.

"Suicide attacks should be at high-value and important targets, because a brave son of Islam should not be used for low-value and useless targets," the code of conduct said.

"In suicide attacks, the killing of innocent people and damage to their property should be minimized," it said.

"All mujahedeen must do their best to avoid civilian deaths and injuries and damage to civilian property." And it says that mujahedeen "should refrain" from disfiguring people, such as the severing of ears, nose and lips.

U.S. and Afghan military officials characterized the document as propaganda, and called it hypocritical.

Omar's message comes as Muslims celebrate Eid al-Fitr, which ends the fasting month of Ramadan, and less than a month before the eighth anniversary of the U.S.-led invasion of Afghanistan, which took place after the September 11, 2001, terrorist attacks.

Omar criticizes the government of Afghan President Hamid Karzai and "the rampant corruption in the surrogate Kabul administration -- the embezzlement, drug trafficking, the existence of mafia networks, the tyranny and high-handedness of the warlords, and spread and increase of the centers of obscenity."

In a recent talk at the Brookings Institution, U.S. Secretary of State Hillary Clinton noted, "Corruption is as big a national security threat as I can imagine" in Afghanistan. The United States has "to take some of the responsibility" for it, she said.

"We aided and abetted it in implicit ways by not demanding more earlier."