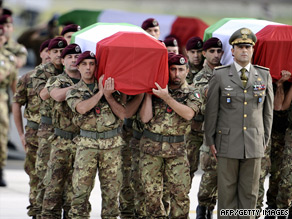 The coffins of six Italian soldiers killed in a suicide attack in Kabul return to Rome.

Sixteen people died in the blast Thursday, and at least 55 Afghan civilians were wounded. Ten have died from their injuries since the bombing.

The explosion Thursday targeted a mostly residential area near the Supreme Court in Kabul, a witness said.

The bodies of the Italian soldiers killed in the blast returned to Italy Sunday, their coffins draped in the red, green and white Italian flag.

Dignitaries, relatives and row upon row of uniformed troops stood on the airport tarmac as the coffins were carried off the plane, television pictures from the scene showed.

Watch more about Italy in mourning »

Italy's President Giorgio Napolitano gently touched the caskets perched on the shoulders of grim-faced soldiers at Rome's Ciampino military airport. Nearby, a woman shook uncontrollably as a baby sported a maroon beret -- the kind worn by the paratroopers killed in the Kabul attack.

The six deaths marked largest number of Italians killed in a single day in Afghanistan.

Before the remains left for Rome, the Italian military, international troops and dignitaries held a service in the Afghan capital.

"It's a tragedy for us," Lt. Col. Renato Vaira of the Italian military said at the Kabul service. "But this is a point to continue our mission."

"We'll miss them. They're not the first. I hope it will be the last," said Maj. Gen. Tommaso Ferro of the Italian military.

The arrival of the soldiers' remains was televised nationally in Italy. The bodies were taken for an autopsy. A day of mourning is scheduled in Italy on Monday, the same day as the burial service.

After the attack, Italian Prime Minister Silvio Berlusconi said it would be "best" for the country's troops to leave Afghanistan as soon as possible. Berlusconi gave no timeline for a withdrawal, but said any pullout would have to be coordinated with allies.

The 500 troops Italy sent to Afghanistan this summer will be home by Christmas, Ignazio La Russa, Italy's defense minister said.

The troops were sent ahead of the Afghan presidential election August 20. The rest of Italy's 2,800 troops in Afghanistan will withdraw only when NATO calls for it, La Russa said.

All About Afghanistan • Italy • Silvio Berlusconi