China clamps down ahead of National Day

BEIJING, China (CNN) -- Leaving nothing to chance, China is undertaking a massive security clampdown for a celebration next month to mark the founding of the Communist state. 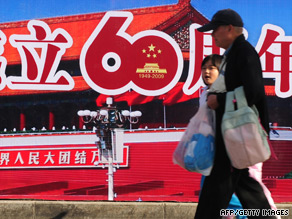 Pedestrians walk past a billboard in Beijing for National Day celebrations.

The festivities at Tiananmen Square on October 1 will commemorate the 60th anniversary of National Day. President Hu Jintao is expected to deliver a speech, and a military parade and fireworks are also planned.

As part of its security measures, the government is building a security "moat" around Beijing, state media reported.

The government will deploy 220,000 security guards and 300,000 community volunteers for the ceremony, the Xinhua news agency said.

Adjoining provinces and municipalities will conduct security checks on roads leading to China's capital city to ward off potential threats.

Residents traveling to Beijing will be required to register their names. Every bus bound into the capital also has to be registered.

Thousands of police officers will stand guard at rail stations. And the government will ground flights during the parade, news reports said. Kite-flying will also not be permitted.

The Chinese will enjoy eight days off, from October 1 to October 8 -- both for the National Day and the Mid-Autumn Festival.

The country's railways ministry said it is expecting about 64 million people to travel by train during that period.

The government has canceled vacations for all firefighters to keep them at hand for an elaborate fireworks display planned for the occasion.

As early as March, police began a nationwide crackdown on March that will continue until October 1.

By the end of August, authorities had confiscated close to 53,000 guns and 2 million bullets, Xinhua said.

The security measures are intended to ward off a spillover of the disturbance that has shaken the western city of Urumqi where long-simmering resentment between minority Uyghurs and majority Han Chinese erupted into riots and left more than 200 people dead in July.

The following month, a series of series of syringe stabbings added to the unrest.

In addition, Beijing was shaken Thursday when a man with a knife fatally stabbed two people and wounded 12 others.