This story contains graphic depictions that may be disturbing to some readers. 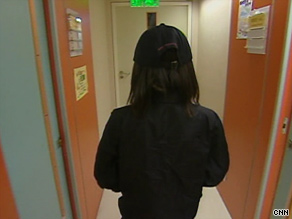 Most girls who engage in compensated dating don't view themselves as prostitutes, a social worker says.

HONG KONG, China (CNN) -- She doesn't want to be identified, except by her nickname "Sze," and she has a secret past. Her father doesn't know what she did as a 16-year-old, and she hopes he never finds out. But Sze, now 19, wants young girls to hear her story so they never make the same mistake.

"My first customer was an ordinary man in his 40s. We skipped the dinner part and went straight to the guest house for sex," Sze recalled. "Actually, I was a bit scared, but I knew this was the only way I could get money. This customer wasn't bad, though. We just had sex, he paid, and then he left. I thought this was easy money, and that's why I continued doing this kind of thing."

For a year and a half, Sze was part of a growing social phenomenon among teens in Hong Kong called "compensated dating," a practice in which a young woman agrees to go on a date with a man for a fee. More often than not, the date involves sex.

Sze said she started compensated dating because many of her classmates at an all-girls school were doing it. She says she became jealous when she saw the designer clothes, bags and cosmetics they bought with the money they earned through compensated dating. Sze wanted the same for herself, so her classmates introduced her to Internet chat forums where she met male customers.

Watch young women describe why they do it »

The practice can have deadly consequences. Last year, a 16-year-old Hong Kong girl was killed in a gruesome murder after she went to a 24-year-old man's apartment for a compensated date. The man, Ting Kai-Tai, killed the teenager, dismembered her body and flushed the remains down the toilet. A jury convicted him of murder and sentenced him to life in prison.

Sze told CNN she knew a compensated date could go horribly wrong. She would set ground rules with clients on the phone first. She charged them $350 for a date and clarified how many times she would have sex with them.

She said sometimes the customers would stray from the rules, asking for more sex or refusing to wear a condom.

"Sometimes, I did feel shame. I kept asking myself why I had to do this kind of thing to make money. But the feeling didn't stay long. I would relax when I wanted to buy something. I just thought I could always quit after a short time or whenever I wanted," Sze said.

Chiu, the social worker, is currently working with about 20 girls who are trying to leave the world of compensated dating. It is hard to quantify how big the problem is in Hong Kong because the business is conducted under the radar, he said.

Chiu believes the problem is getting worse because his caseload has doubled in the past two years.

Prostitution is illegal in Hong Kong, and legal experts say that compensated dating is a form of prostitution. "The law prohibits soliciting for immoral purpose," said Stephen Hung, a criminal litigator with Pang, Wan & Choi. "When a court looks at sentencing, the greater the age difference, the more serious it (the sentence) is."

Why do young girls get involved in compensated dating? The reasons vary from an unstable home life to a desire for material goods, Chiu said.

One 14-year-old girl told him she started compensated dating when she lost her cell phone. She said her parents wouldn't buy her a new one, so she thought she could earn some fast money with paid sex. She had her eye on an expensive cell phone. When the money from the first compensated date didn't cover the cost for the new phone, she went on a second paid date.

"The family has to do its part. I think caring for children is very important. Whenever they have problems, they can ask someone for help."

Sze said she was saved by a social worker who stepped in on her behalf. After a pregnancy scare and a number of unpredictable customers, Sze said her self-esteem plummeted. The social worker helped her get back on track.

"She helped me understand that making money respectably is actually not that hard in Hong Kong. I finally realized that it was wrong to make money by selling my body. It just wasn't worth it."

Sze now works at a hair salon to earn a living. She has tried to talk her old friends out of compensated dating, but they are not listening, she said.

"They felt annoyed when I talked to them about this. I'm now reluctant to get in touch with them. They just tell me they're different. Maybe they have more serious family problems or some other burdens. I know I can't control their thinking, so I just stopped trying to help them."