(CNN) -- China's space program has really taken off in the last six years. 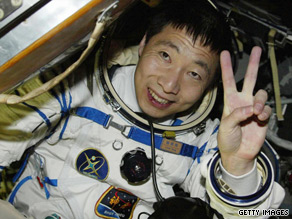 Back to Earth: Yang Liwei faces the cameras on returning to Earth in 2003.

"The moment I stepped out of the hatch and entered space, the sensation of completely becoming one with space was a feeling I had never felt before on Earth," Zhai told CNN.

View the photo gallery to learn more about the history of China's space program.

From out of this world moments to their place in Chinese history, these two pioneering spacemen tell CNN's John Vause about their missions, how they had prepared for the worst should things go wrong and if China and other nations with the moon in their sights are creating a new international space race.