JAKARTA, Indonesia (CNN) -- A baby made his way into the world this week in Indonesia at 19.2 pounds (8.7 kg) -- about three times the weight of an average newborn. 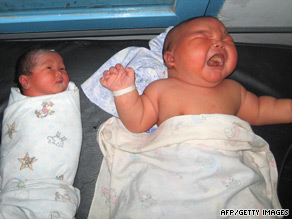 The giant baby lies next to a more typically-sized newborn.

Muhammad Akbar Risuddin, born Monday, is thought to be the heaviest baby born to date in Indonesia.

"I was very surprised. I thought it was twins," said Binsar Sitanggang, the lead doctor in the cesarean-section delivery at Abdul Manan Hospital in North Sumatra.

"It needed a longer time than normal to deliver this baby," Sitanggang said. "He was hardly breathing when we took him out. But, thank God, he is healthy."

His parents, Hananuddin and Ani, who like many Indonesians use only one name, have two other children. Both were big at birth but were not abnormally large. Their new addition is 24.4 inches (62 cm) long.

"We can compare this giant baby with a 9- to 10-month-old baby," Sitanggang said. "Both his parents are tall and big, so there might be a genetic cause for this."

The boy has become somewhat of a celebrity. Curious people streamed into the hospital Friday for a glimpse. Even the mayor came by and had the honor of naming the infant after himself.