SEOUL, South Korea (CNN) -- Some families long separated by the Korean War saw their loved ones Saturday for the first time in years near the border between North and South Korea. 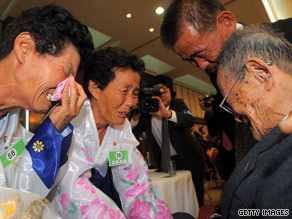 South Korean Yoon Ki-Dal, right, meets the children he left behind as babies during the Korean War.

Yoon Ki-Dal, 88, of South Korea thought such a moment would never come. After leaving his son and daughters when they were babies during the Korean War, he was able to hold the hands of his North Korean children on Saturday.

"Father, we thought you were dead," his daughter, now in her 60s, told him, her face trembling.

Their family was one of 97 reunited Saturday on Mount Keumgang, a North Korean resort near the eastern part of the border, after decades of separation by war and ideology.

And soon these families will be separated again. They are allowed to be together for a few days. Then the South Koreans must return home.

The reunions -- the first in nearly two years -- are taking place through October 1.

Millions of families were separated by the Korean War, which ended in 1953 with a cease-fire and no formal peace treaty. No mail, telephone or e-mail exchanges exist between ordinary citizens across the Korean border.

The agreement to hold the reunions came after North and South Korea held three days of talks, mediated by the International Committee of the Red Cross, last month, South Korea's Yonhap news agency reported at the time.

About 10,000 people applied to take part in the reunion, but fewer than 200 families were allowed to participate. In addition to the 97 families who met Saturday, another 99 families are expected to meet next week, authorities said.

Participants are selected randomly, and there is no date set for a further reunion, which means the tens of thousands of others who were separated by the Korean War have no idea when they may get a chance to see their loved ones -- if ever.

For the many separated family members who are elderly, a reunion may never be possible.

Reunions between North and South have been taking place off and on since 2000 after an inter-Korean summit in Pyongyang, Yonhap says. The last reunion took place in October 2007.

Rapprochement talks between the two Koreas have hit a wall since conservative South Korean President Lee Myung-bak took office in early 2008 with a tougher stance toward the North than his liberal predecessor, Roh Moo-Hyun.

The two Koreas have remained in conflict since the conclusion of the Korean War in 1953.

The meetings and reunions are in stark contrast to the tense public statements each side made about each other earlier this year.

Tensions between the two were heightened in July when North Korea launched seven short-range missiles toward the Sea of Japan, also referred to as the East Sea. The launches came after North Korea conducted a nuclear test on May 25 and threatened U.S. and South Korean ships near its territorial waters.