(CNN) -- At least 51 people have died and at least 21 others are missing after torrential rains and subsequent flooding pummeled the Philippines on Saturday, the government said. 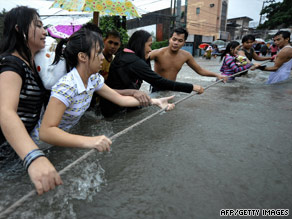 Tropical Storm Ketsana spawned the flooding, which caused at least six of the deaths in Manila, the nation's capital.

Manila and the nearby province of Rizal bore the brunt of the downpour, said Gilberto Teodoro, secretary of national defense and chairman of the National Disaster Coordinating Council.

Two of the dead in the capital city were victims of a wall that collapsed, he said.

"My neighborhood rarely gets a bad flooding and I guess this is the worst," said CNN iReporter Jv Abellar from Quezon City, Philippines.

In all, 41,205 people had sought refuge in 92 evacuation centers, Teodoro said.

Some roads in the capital metropolitan area had reopened, but "we do not encourage people to travel these roads," Teodoro told CNN in a telephone interview.

"They can be a hindrance to efficient relief and rescue operations."

The federal government began massive relief efforts to aid the local governments, and set up aid centers addressing pressing problems such as sanitation and water purification.

President Gloria Macapagal-Arroyo has ordered pay parking lots at malls in Manila to be opened so motorists can leave their cars there without charge, Teodoro said. iReport.com: Share images of Philippines flooding

Manila's Nino Aquino International Airport and nearly all of the country's other international airports had reopened, he said.

Though the Philippines is no stranger to floods, Saturday's downpours approached a record, with 341 mm (13.4 inches) falling between 8 a.m. and 2 p.m., he said.

The average rainfall for the entire month of September is 391 mm (15.4 inches), he said.