(CNN) -- The death toll from flooding in the Philippines climbed to 140 Monday as a tropical depression in the Pacific sparked new fears of flooding. 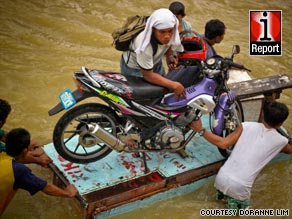 iReporter Doranne Lim captures the desperate measures some people are being forced to take.

Flood water began to subside after a weekend that saw Manila hit with its heaviest rainfall in more than 40 years.

More than 80 percent of the capital was under water at one point Sunday. The deluge caused by Tropical Storm Ketsana, which has since strengthened into a typhoon, engulfed whole houses and buses.

At least 140 people have died, the National Disaster Coordinating Council said. Are you there? Share your story or pictures

Manila, on the island of Luzon, and the nearby province of Rizal bore the brunt of the storm. People huddled on rooftops Sunday waiting on army helicopters to pluck them to safety. Others used ropes to wade through waist-deep muddy waters.

The average rainfall for the month of September is 391 mm (15.4 inches), said Gilberto Teodoro, chairman of the National Disaster Coordinating Council.

"The storm's local name 'Ondoy' is really a powerful storm, and this is the most severe storm in my whole life," he said in an iReport video to CNN.