(CNN) -- President Hu Jintao inspected China's defense forces in Beijing on Thursday, as the country held celebrations to mark the 60th founding anniversary of the People's Republic of China. 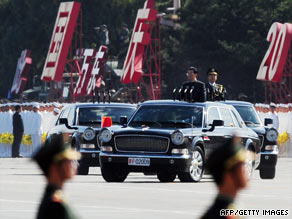 Hu, wearing a high-collared dark Mao suit and riding in a black open-roof Red Flag limousine, passed by tens of thousands of soldiers and militia and ranks of camouflaged tanks and missiles.

"Greetings, comrades," Hu said as he saluted the troops, according to state-run Xinhua news agency.

Hu's inspection of the troops was the first in a decade, according to Xinhua.

Watch the military on showcase, as Hu rides past »

About 200,000 soldiers and civilians -- from veterans and athletes to space heroes and young people -- gathered in Tiananmen Square for the National Day military and mass parade showcasing achievements of the last 60 years, Xinhua reported.

The packed square resembled a carnival as colorful crowds marched, cheered and waved. A 60-cannon salute rang out as the nation's flag swept over the square.

The army showed off its latest weapons, which officials touted as made in China. Weapons on display included China's new generation of tanks, unmanned aerial vehicles and satellite communication devices, Xinhua said.

More than 150 fighter jets, bombers, helicopters and other aircraft were to fly over the square, including a fly-past by China's first batch of female fighter pilots, state-run media said.

A 1,300-member military band were also to make an appearance, according to Xinhua.

Rain-dispersal rockets fired into the area in surrounding provinces and regions to induce rain before it reaches the capital in the largest weather-intervention effort since the opening ceremony of the Olympics last year, Xinhua reported.

All About China • Beijing