Two quakes in the same region in a day - coincidence?

(CNN) -- Four tropical cyclones, two major earthquakes with accompanying tsunamis, all occurring around the Western Pacific and Southern Asia within one day. 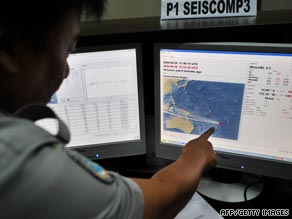 The goal for scientists is to provide warnings ahead of these deadly earthquakes.

So much activity in the same portion of the world, how unusual is something like this, and could they be related?

According to CNN meteorologist and weather producer Brandon Miller, this is certainly not unprecedented as far as tropical systems go. "September represents the peak of tropical activity around the world, and the Western Pacific sees more tropical cyclones each year than anywhere on the globe, so even having four systems active at the same time is not incredibly unusual," he said.

Perhaps the more intriguing events are the two major earthquakes; the 8.0 magnitude near Samoa Tuesday followed by the 7.6 magnitude in western Indonesia.

The epicenters of the two tremors are about 4,700 miles (7,600 km) apart, but the U.S. Geological Survey has declined to say whether the two quakes were linked.

Miller said: "We only see between five and 10 earthquakes of this magnitude on average around the globe each year, so to see them in the same general region within 18 hours seems to be quite a coincidence."

The earth is covered with a relatively thin set of tectonic plates that make up the outer shell of the planet -- known as the lithosphere. The plates are all connected and constantly moving, creating pressure and tension along their boundaries. Earthquakes occur when this tension reaches a critical maximum, and similar to a rubber band that has been stretched to its limits, it will snap.

"It seems to reason that a large earthquake in one location could provide the extra force needed in another nearby location, to stretch that rubber band to the breaking point, thus triggering another earthquake," Miller said.

Several of these plates surround the Pacific Ocean basin forming an arc of quake sites and active volcanoes known as the "Ring of Fire." This ring is actually a 40,000 km horseshoe shape, where most of the Earth's active volcanoes above sea level and most of the world's earthquakes are located.

So did the Samoan quake help to trigger the Indonesian quake?

"While we cannot say for sure, it does seem plausible," said Miller. "Scientists will certainly study these events and try to find any connection that could tie them together, with the ultimate goal of some day being able to provide warnings ahead of these deadly earthquakes."

The biggest earthquake ever measured -- magnitude 9.5 -- occurred within the ring along the coast of Chile. It created a tsunami that killed around 2,000 people before it radiated outwards, killing 61 people in Hawaii and 122 in Japan.

In December 2004, an earthquake measuring at least 9.0 struck off the coast of the northern tip of Indonesia's Sumatra island, triggering a major tsunami in the Indian Ocean that killed more than 200,000 people in 11 countries. The impact on Indonesia, Thailand and Sri Lanka was particularly devastating.

The most famous volcanic eruption in recent history was Krakatoa, Indonesia in August 1883. It generated 40-meter tsunamis that smashed into islands nearby, destroying hundreds of villages and killing tens of thousands of people.