In Indonesian villages, nearly all residents feared buried in rubble

PADANG, Indonesia (CNN) -- An area that now looks like a flattened mess of destruction was, just days ago, a group of three villages. 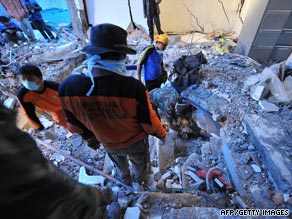 Rescuers search for victims in a collapsed building in Padang, Indonesia, on Friday.

A 7.6-magnitude quake struck Sumatra on Wednesday, with a 6.6-magnitude earthquake hitting Thursday morning in the same region.

Wednesday's quake reduced buildings to rubble in the city. People used hammers, chisels and even bare hands to dig through debris for survivors and belongings. Staff at a local hospital treated the injured outside the semi-collapsed building as bodies of the dead lay in makeshift morgues.