(CNN) -- Thousands of Filipinos who live near coastlines and mountainous areas were evacuated Friday as the storm-battered country braced for Typhoon Parma, which is expected to make landfall Saturday. 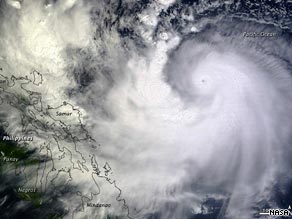 A NASA satellite image shows Typhoon Parma as it heads towards the Philippines.

Parma had maximum sustained winds of 132 mph (212 kph) and was on the doorstep of northern Luzon, in the northern part of the Philippines, early Saturday.

It was expected to make landfall along the country's northeastern coast Saturday.

Tropical Storm force winds extended well over 300 kilometers (186 miles) -- far enough to include Manila -- and heavy rain was expected to pound much of the country.

Parma could develop into a super typhoon, the Philippines weather bureau said.

Meteorologists consider a super typhoon to be one with sustained winds of about 150 mph (241 kph).

Parma, known locally as Typhoon Pepeng, comes on the heels of a weekend storm that killed hundreds in the Philippines and left most of Manila underwater.

President Gloria Macapagal-Arroyo placed the country "under the state of calamity" in preparation for Parma's landfall. She ordered evacuations as a precautionary measure against floods and landslides, and asked weather officials to issue an hourly update. She also urged local governments to implement forced evacuations if necessary.

Thousands have been evacuated in Isabela and rescue crews have a "standing order to use force if necessary" to move adults and children, said Paul Fernandez, who is overseeing disaster relief in Isabela. The government is providing the province with relief funds, he said.

Evacuees were taken to schools and warehouses on higher ground, he said.

Parma could trigger landslides and mudslides.

A five-day tracking map shows the storm south of Taiwan on Monday.

Tropical Storm Ketsana, which swallowed whole houses and buses over the weekend, killed 246 in the Philippines. It later strengthened into a typhoon. An additional 38 are missing, the National Disaster Coordinating Council said. The storm affected nearly 2 million people and forced the evacuation of 567,000.

At one point, 80 percent of the capital, Manila, was underwater after experiencing the heaviest rainfall in 40 years.

The storm also killed at least 74 people in Vietnam and nine in Cambodia.