Mom in tsunami: I saw my daughter floating away 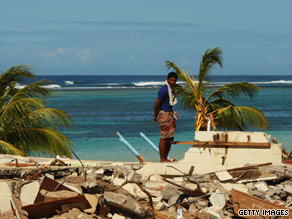 A man stands on the remains of what was once a tourist resort in Samoa's capital of Apia.

"I held her hand. The wave got us and that's when her hand just left mine and I could hear her say, 'Mom, please.' And then I saw her, I saw her floating away. And I knew right then that she was gone, she was taken from us."

Taitasi Fitiao ran to her daughter's school after an 8.0-magnitude earthquake rocked the small cluster of Samoan islands early Tuesday, triggering a tsunami.

The teacher had let the students go home after the temblor struck. Fitiao had felt some relief when she briefly united with her daughter, but then the wave came.

The villagers of Leone --one of the largest towns in American Samoa with a population of more than 2,000 -- searched for Valjorefa. They found her about one day after the waves took her from her mother.

"When they found her, she still had her backpack on and school uniform," Fitiao said.

The Fitiao family plan to bury her with her gray-and-black backpack because she loved school so much.

Watch a family mourns the loss of their daughter »

At the family home on Thursday, Valjorefa's backpack was drying on a clothing line and some crayons and a notebook with her school work were on the ground. They plan to bury her in the front yard, as is the custom here.

"We really miss our daughter," said her father, Faataui Fitiao.

Ten people, including Valjorefa, died in Leone. Villagers and the U.S. Army reserves are looking for one person still missing: a six-year-old boy, whose family wants to bury him in the front yard, too.

At least 168 people are confirmed dead in the aftermath of Tuesday's quake and tsunami. They include 22 people killed in American Samoa, 139 in Samoa and seven in Tonga, according to officials on the islands.

Watch the tsunami take over a street » |

A second quake, a 5.5-magnitude temblor struck near the Samoan islands at 6:13 p.m. Wednesday evening (1:13 a.m. Thursday ET), according to the U.S. Geological Survey, while a 6.3-magnitude quake rattled Tonga on Friday.