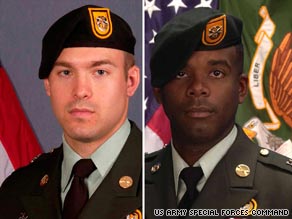 Both soldiers were based at Fort Lewis, about 40 miles south of Seattle.

King said the soldiers were working with members of the Filipino military on a project to build a school when they were killed. One Filipino soldier was also killed, and two more were wounded, he said.

Tuesday's bombing, King said, was the second fatal attack on Americans working with the Filipinos. In 2002, a U.S. Marine was killed by a bomb set by the militant group Abu Sayyaff.

It was Shaw's second deployment to the Philippines and the first for Martin, who served in Iraq, according to a news release from U.S. Army Special Forces Command.

"We lost a husband, father, son, brother and uncle," Shaw's family said. "Chris was a man who deeply loved his family and believed that he was making a difference in the fight against terror."

Shaw was married with five children, according to the Army release.

Jolo is a well known stronghold for Abu Sayyaff, which is fighting to establish a separate Muslim state. The U.S. military is providing support and training to the Philippines in the battle against the terrorist group, which has ties to al Qaeda.

King said it was not immediately clear who was responsible for the latest bombing.

"Abu Sayyaff has not claimed responsibility," he said. "It's still being investigated if they were responsible, but the Filipino military is certainly going down that road."

About 600 U.S. military personnel serve in the Philippines at any one time, King said. Their mission is to assist the Filipino military and build support among the civilian population, he said. U.S. soldiers taking part in the mission are not allowed to engage militants unless acting in self defense.

"Despite what Hollywood portrays about Special Forces being the tip of the spear," King said, "a good part of the mission is developmental projects like helping local schools and building wells."

All About Military Order of the Purple Heart • Al Qaeda • Philippines