Up to 4,000 buried in Indonesian quake rubble

PADANG, Indonesia (CNN) -- As many as 4,000 people could be buried under the rubble in the aftermath of the devastating earthquakes in Indonesia, United Nations officials said Saturday. 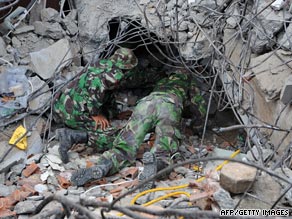 Indonesian soldiers crawl under the rubble of a collapsed building to search for victims.

Local disaster management officials put the death toll from the quakes at 540.

A 7.6-magnitude quake struck Sumatra on Wednesday and a 6.6-magnitude earthquake hit Thursday morning in the same region.