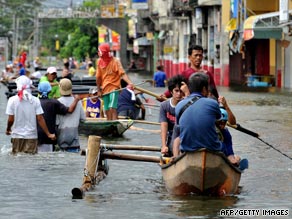 Residents paddle boats through the streets of Santa Cruz, south of Manila.

At least three other deaths related to the storms were confirmed earlier.

Among the latest victims were children ages 8 and 10, a local reporter who was at the scene of both landslides told CNN.

The storm is expected to stall for at least three days north of Luzon -- the largest of the Philippine islands -- dumping more rain on the island nation still reeling from a typhoon last week, said CNN meteorologist Ivan Cabrera.

Heavy rains will remain, but wind will not be much of a factor, Cabrera said.

Aid agencies were in the area assisting survivors.

"There are many uprooted trees, as well as down power lines, making roads impassable in some areas," said Wilma Lacaden, a member of the World Vision organization, in a statement. "Homes constructed of light materials were blown away. In many areas, there is no electricity, and rivers have overflowed, making some towns and villages inaccessible."

World Vision staffers handed out food and candles to 200 families on Saturday night, and plan to assist another 350 families in nearby Zambales on Sunday, distributing relief packs of food and water, the statement said.

Parma, known locally as Typhoon Pepeng, made landfall Saturday afternoon in a rural region of fishermen and farmers in Luzon. Tens of thousands of people fled their homes for safer shelter.

Winds whipped the coastline and felled power lines in northernmost Cagayan Province. Debris littered the roads, making evacuations more difficult. Read about the fate of a farming community in Cagayan

In the capital city on Sunday, it was sunny, Manila resident Arturo Fidelino said in an e-mail to CNN, adding the last few days have been "grueling" for Filipinos.

"After those two horrendous typhoons ... we've got to start picking up the pieces and move on," he said. "Easy for me to say and for those who were not worst hit by the devastation, but too difficult for those whose houses were wiped out, furniture destroyed and relatives and loved ones nowhere to be found."

However, he said people have banded together to help one another, and it "has made me realize that the 'bayanihan spirit' (part of Filipino culture where neighbors help each other) among Filipinos is still alive and kicking. All along I thought that it has just been part of our history and not part of this present times. I was mistaken."

Fidelino wrote his 73-year-old mother had to be evacuated when her home flooded.

The typhoon is expected to dump as much as 8 to 20 inches of rain in areas still water-logged from last week's Typhoon Ketsana. That storm resulted in the heaviest rainfall in 40 years and at one point, 80 percent of Manila was submerged.

CNN's Eunice Yoon and Pamela Boykoff in Cabantuan City, and Josh Levs in Atlanta contributed to this report.