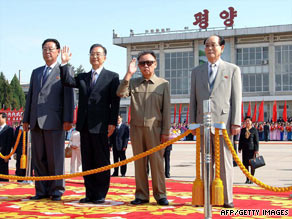 The attitude shift by North Korea -- which pulled out of talks in April to protest the United Nations' condemnation over its nuclear test and missile launches -- came amid Chinese Premier Wen Jiabao's weekend visit to Pyongyang, Xinhua reported Monday.

In response to the reports, U.S. State Department spokesman Ian Kelly said the United States "remains willing to engage North Korea bilaterally within the framework of the Six Party process to convince North Korea to take the path of complete denuclearization."

Pyongyang recently invited the Obama administration's special envoy for North Korea to visit. And in August, North Korean diplomats traveled to New Mexico to meet with Gov. Bill Richardson, where they were open to direct bilateral talks with the United States.

Watch the mixed signals North Korea has given on talks »

Still, in a September letter to the United Nations, North Korea announced that Pyongyang's"reprocessing of spent fuel rods is at its final phase and extracted plutonium is being weaponized," state media reported at the time.

North Korea could enter the final stage of uranium enrichment, it said in the letter to the president of the U.N. Security Council, according to state-run KCNA. When enriched to a high degree, uranium can be used as weapons-grade material. Plutonium can be used in atomic bombs.

Despite stating in the letter that they "totally reject" a Security Council resolution in June that demanded that the country no longer pursue nuclear weapons, the North Koreans said they are "prepared for both dialogue and sanctions," KCNA reported.