ISLAMABAD, Pakistan (CNN) -- The new leader of the Pakistani Taliban vowed revenge on Pakistan, the United States and NATO forces for drone attacks along the Afghan border, two local journalists who attended a meeting with him told CNN. 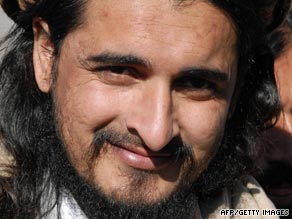 Leader Hakimullah Mehsud met reporters Sunday in South Waziristan, according to the journalists, who spoke on condition of anonymity because they are not authorized to talk to the news media.

Taliban commanders Wali-Ur Rehman and Qari Hussein, and spokesman Aazam Tariq, were at the meeting as well, the journalists said.

Mehsud also vowed to avenge the recent death of Taliban leader Baitullah Mehsud, they said. Officials think he was killed by a drone attack in August.

The leader said the Taliban would not disarm as a condition for talks, and added that the militants' withdrawal from the Swat Valley was a strategic move and not a retreat or a defeat, the journalists said.

South Waziristan is one of seven districts in Pakistan's tribal region along the Afghan border.

The Pakistani military is fighting Taliban militants in the country's north, and missile attacks from suspected U.S. drones have targeted militant leaders.

U.S. officials do not comment on suspected drone strikes, which have caused tension between Pakistan and the United States.