MADRID, Spain (CNN) -- A Spanish judge Tuesday ordered an Argentine pilot to be kept in prison in Madrid, Spain, until a decision is made about whether he should be extradited to his home country on charges that he participated in "death flights." 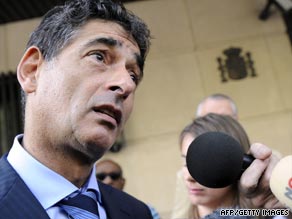 The lawyer for Julio Alberto Poch talks to reporters outside the court in Madrid.

Former Argentine Navy Lt. Julio Alberto Poch is one of two pilots arrested recently for allegedly piloting "death flights" in which more than 1,000 prisoners were thrown alive out of planes during Argentina's "dirty war" in the 1970s and '80s, officials said.

Judge Eloy Velasco, at the National Court, ruled that Poch, who was arrested in Valencia, Spain, last month on an Argentine warrant, would not be granted provisional liberty, despite his defense lawyer's request, said the court spokesman, who by custom is not identified.

Poch appeared Tuesday in a closed-door hearing that lasted about an hour in the judge's chambers at the high-security court, which handles cases of terrorism, the spokesman said. The decision on extradition could take several months, the spokesman said.

Poch and Sisul Hess are accused of piloting aircraft from which drugged and blindfolded prisoners were hurled to their deaths in the Atlantic Ocean or the Rio Plata.

The prisoners included students, labor leaders, intellectuals and leftists who had run afoul of the dictatorship because of their political views. Most were dragged off the street or otherwise summarily arrested and held without trial in secret prisons where many were tortured.

According to Telam, both men were arrested after they told colleagues or friends about their alleged involvement.

Argentine human rights activist Hebe de Bonafini, who lost two sons and a daughter-in-law in the "dirty war," said Monday she found no joy in the arrests.

"You can never take back the horror," she said. "In no way am I happy."

Bonafini is president of the Association of the Mothers of the Plaza de Mayo, a group of mothers whose children disappeared during the war. She urged the government to continue looking for war crime suspects. Speaking of the pilots, she said, "There are several. They are not the only ones."

Poch, a commercial pilot for the Dutch airline Transavia.com, was arrested September 23 when his flight made a stopover in Valencia, Telam said. He was wanted on an international arrest warrant.

Poch had been a navy pilot from 1976 until late 1980, Telam said. Upon leaving the navy, he moved to Holland and had been living there since.

Argentine federal Judge Sergio Gabriel Torres is pursuing the extradition of Poch and handling the arrest of Sisul Hess.

Torres traveled to Holland to question Poch's colleagues and others, Telam said.

An aviator told Torres that Poch had said at a restaurant in Indonesia in December 2003 that there were occasions in which people were thrown out of helicopters and airplanes because the armed forces were dealing with "terrorists," Telam said.

The aviator, identified as Tim Eisso Weert, told the judge that Poch said it was a humane way to execute people because they were drugged, the government news agency reported.

A co-pilot told the judge that Poch had said they "should have killed all" the subversives, Telam reported, and that he admitted "some responsibility" because "when you fly persons on board the responsibility lies with the pilot."

Sisul Hess is similarly said to have implicated himself, telling friends that the prisoners "did not suffer because they were drugged, falling like little ants," Telam said.

He was arrested September 29 and transferred to Buenos Aires, Argentina's capital.

Judge Torres was not available Monday to take three phone calls from CNN, aides said. Nor were any documents on the cases available, the aides said.

CNN's Arthur Brice and Al Goodman contributed to this report