HYDERABAD, India (CNN) -- A blanket of water hides the devastation underneath it. Miles and miles of villages, small cities, and farmland are spoiled by standing flood water. 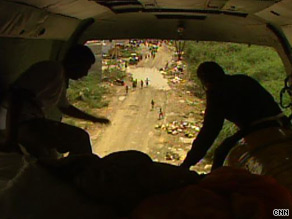 First the waters raged for days, then they seemed to pull back almost as fast as they came but the damage had been done with such fury that more than 1.5 million were left homeless.

"Everything was drowned," flood victim Mohammed Farooq Basha said. "The water came to the second floor we called for help. No one came."

He lives in Kurnool where more than 200,000 people were trapped when the water suddenly surrounded the town in Andhra Pradesh.

For two days he and his family survived without food or water until the floodwater receded freeing them, he told CNN. "We were hungry, thirsty. The child got a fever."

But they lived. Now he is back sitting in front of his home trying to put his life back in order. It means removing the thick mud that has attached itself to everything in his home.

He is not the only one toughing it out and trying to reverse the effects of the worst flooding here in decades.

Like many he lost not only his home but his business. All the dahl -- lentils that are a staple of the Indian diet -- he had prepared to sell were spoiled by the grayish brown flood waters.

He did not mince words when asked about aid to flood victims. "Nobody has come to help. Nobody," he said. "No drinking water, no clothes, nothing for four of five days."

But there are efforts being made. On the ground the government camps are visible in some villages. In the air the Indian Air Force helicopters have been dropping supplies for days, never mind making intensely dangerous rescue missions in the first few days.

Some people were stuck in trees including a family of four, Indian Air Force Helicopter Pilot P.K. Chugh said. "They were stuck on the branches of the trees for two days without food or water ... no sleep. Just imagine yourself sitting on a branch without sleep, food, water."

Aid workers from both local and international non-governmental organizations are also in the area trying to help. But with so many people in need of food, water and shelter the needs are way beyond what is being done.

Besides the humanitarian toll there is an economic one too. The floods have damaged hundreds of kilometers of crops in the two southern states.

In India 60 percent of the working population relies directly on the land to make a living and another 10 percent indirectly, economists say. In both Karnatak and Andhra Pradesh vegetable crops have been badly hit and not only by the floods.

India has also suffered droughts in many states this year. The brutal combination has created higher food prices and threatens to impact India's economy as a whole.

But for those caught in the extreme weather the concerns are all about survival.

Back in Kurnool, Padmawati sits rubbing the mud off utensils and worries where she will get her next meal and if there will there be any clean water to wash it down.

"There is nothing to eat, no water to drink, there is no sanitation and no power."