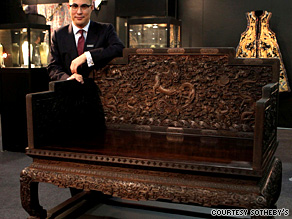 There was frenzied bidding among mainland, Hong Kong and Taiwan collectors at the Sotheby's auction in Hong Kong.

Thirty-six bids came in 10 minutes, with tension building as a new telephone bidder jumped into the competition.

"These mainland (China) buyers, mainland collectors are ready to pay the premium it takes to secure an object of this quality," said Nicolas Chow, international head of Chinese ceramics and art at Sotheby's.

Watch why the throne is so prized »

"This is the place from which the emperor conducted his stately affairs and received foreign envoys and basically, this is a seat of power," Chow said. "No one else should have sat down in this place."

The 4.6 foot-long (140 centimeters) piece is considered rare and prized because of the zitan wood from which it was carved. It also features carved panels, curved legs and an elaborate "Five Dragon" carving on the front and back. The number five represents the "five blessings" of old age, wealth, health, virtue and peaceful death, according to Sotheby's.