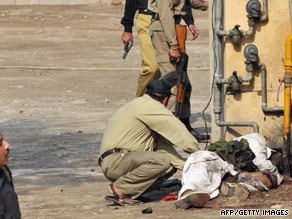 A bomb disposal squad member removes a suicide jacket from a body at the FIA in Lahore on Thursday.

At least 10 militants also died in the fighting, while others were missing.

The attacks on five targets in two cities were carried out on the same day that U.S. President Barack Obama signed legislation providing an additional $7.5 billion in assistance to the Pakistani government.

Among other things, the act promotes a partnership aimed at "combating the extremism that threatens Pakistan and the United States."

The three assaults began about 9 a.m. and were nearly simultaneous, police spokesman Rai Nazar Hayat said. The militants stormed each facility before setting off explosives and, in some cases, taking hostages.

Watch a rundown of the day's attacks »

"(If) the law enforcement agencies are not safe ... how can the common man feel safe?" asked Amir Mughal, a civilian witness to the attack on the investigation agency. "Our children go to school -- even they are so scared," he added.

"We don't know that we can get back to our homes after work."

Shakeel Ahmad, a witness to one of the training center explosions, acknowledged he is afraid, but added: "On the other hand, we are motivated also by seeing these army soldiers. We are with them."

About a half hour after the trio of attacks, a suicide car bomber hit a police station in the Kohat district of northwestern Pakistan, killing at least 11 people -- eight civilians and three police, said Kohat Police Chief Dilawr Bangish. A dozen people were wounded.

The offices of several senior police and government officials and several military installations also are nearby.

In Peshawar, a remote control bomb exploded inside a car parked in front of an apartment building.

A hospital official said an 8-year-old boy was killed and eight people -- four women, two men and two children -- were wounded. One of the children, a girl, is in critical condition. The blast took place in a residential area for government officials and employees.

At least 41 people were killed and 45 wounded in a blast Monday at a security forces checkpoint in northwest Pakistan. The explosion occurred in the Shangla district in the volatile Swat Valley.

All About Pakistan • Suicide Attacks