KABUL, Afghanistan (CNN) -- The United States and France urged the Afghan president and his main rival to respect the results of an August election in order to ensure the country has a legitimate government. 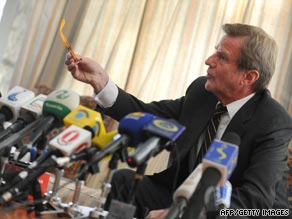 Bernard Kouchner addresses reporters in the French embassy in Kabul.

The results of the election are still unclear nearly two months after the vote as officials investigate reports of widespread vote fraud.

One of President Barack Obama's top advisers said President Hamid Karzai and his main challenger, former foreign minister Abdullah Abdullah, had to find a way to make sure the Afghan people respected the result.

"There are two roads here," White House chief of staff Rahm Emanuel said on CNN's "State of the Union" Sunday.

"One is another runoff election between the two top candidates, and/or a negotiation between those candidates. But the end result must be a legitimate and credible government ... that's what's important," he said.

The United Nations has said the August 20 presidential election was marked by "widespread fraud."

Kai Eide, head of the U.N. mission in Afghanistan, said last week that the vote was flawed.

During a visit to Kabul Sunday, Kouchner said he expected Karzai to win the runoff, if one was needed.

"Hamid Karzai was winner in the first (round)," Kouchner said. "I think in the second round he will be the winner, too."

He said the "legitimacy" of the election was the most important thing.

"For this democratic process, most of the Afghans and international soldiers have taken risks," he said.

He admitted the "election was marred with widespread fraud, but there were also international observers."

Any second round would have to be held quickly, he said.

"My concern is about coming of the winter, the management of the second round and security," he said.

But they have tentatively set November 1 as the date for a runoff if one is necessary.

On Saturday, U.S. Sen. John Kerry -- who chairs the Senate Foreign Relations Committee -- urged Obama not to send more troops to Afghanistan before the results of the election are clear.

"It would be entirely irresponsible for the president of the United States to commit more troops to this country, when we don't even have an election finished and know who the president is and what kind of government we're working in, with," Kerry told CNN's John King in an interview which aired Sunday on "State of the Union."

Secretary of State Hillary Clinton said Friday that she expects Karzai to be declared the winner outright.

"It is likely that they will find that President Karzai got very close to the 50-plus-1," she said in an exclusive CNN interview, referring to the simple majority needed to avoid a runoff. "I think one can conclude that the likelihood of him winning a second round is probably pretty high."

Clinton said the timing of Obama's decision on whether to commit more troops to the fight in Afghanistan will not hinge on the election results.

"I think the president is expecting to make a decision on his own timetable," she said, "when he is absolutely comfortable with what he believes is in the best interest of the United States."

The Afghan ambassador to Washington, Said Jawad, said Thursday any runoff would have to be held quickly. He said a two-week deadline, as spelled out in the Afghan constitution, would be "impossible," but added that the voting should be held in either late October or early November.

The final vote tally would be expected two weeks later.

If the election were not held by early November, he said, winter weather would make voting impossible and force a delay until spring of 2010. Such a delay, he warned, would be a "recipe for disaster" that would create confusion in Afghanistan and heighten tension between the United States and Karzai's government.

Journalist Matiullah Mati and CNN's Tomas Etzler in Kabul and CNN's Jill Dougherty and Elise Labott in Washington contributed to this report.