ISLAMABAD, Pakistan (CNN) -- Pakistan's army said Sunday it has killed 60 "terrorists" as it battles to wrest control of part of the country from the Taliban. Five soldiers were killed in the last 24 hours of the assault, the military said. 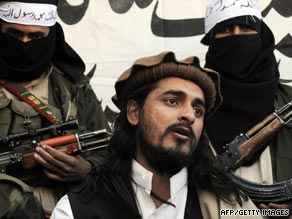 But the Taliban claimed they had killed 68 Pakistani security forces in the last day. Pakistani Taliban spokesman Azam Tariq told CNN by phone that only one Taliban fighter had been killed and three injured in that time.

He said the Taliban had killed the Pakistani troops with roadside bombs and in combat.

He said the anti-government forces had "huge quantities" of weapons "which we got during the war against Russia and it is sufficient for us for many years," he said, presumably referring to the Soviet Union's 1979-1989 occupation of Afghanistan.

Pakistani troops launched the massive ground offensive backed by air power this weekend in South Waziristan, a refuge and a power base for insurgents operating in Pakistan and along the Pakistani-Afghan border.

The highly anticipated offensive comes after a wave of suicide attacks in Pakistan. It has prompted the exodus of tens of thousands of civilians, the U.N. refugee agency said.

Although the offensive is not the first, it is the most important, military spokesman Gen. Athar Abbas told CNN, "because we have concluded that this area has become the center of gravity of the problem."

Pakistan said it was not targeting civilians.

"In some areas, people (including women) raised white flags; they were left off after search," Pakistan said in a statement.

One military official said Pakistani troops seized control of Kotkai, the home village of Pakistani Taliban leader Hakimullah Mehsud, where Mehsud has lived with fellow Taliban commander Qari Hussein. Hussein is the mastermind of some of Pakistan's deadliest suicide attacks.

Airstrikes from jet fighters and helicopter gunships targeted militant hideouts in Kotkai and the villages of Badar, Barwand, and Khisur -- all strongholds of the Taliban and their late leader Baitullah Mehsud, another official told CNN.

Watch how the offensive began »

The officials asked not to be identified because they are not authorized to speak to the media.

Four Pakistani soldiers were killed and 12 others were wounded on the first day of the battle, the military said.

The ground offensive in South Waziristan was launched Saturday morning after the military received clearance from the government, said Gen. Athar Abbas, the Pakistan military spokesman.

He said the region's eight entry and exit points have been sealed by troops.

Asked by CNN about the potential that the Taliban militants might flee, Abbas said, "there's a huge presence of security forces in the area." When the main arteries in and out of the area are closed and the militants' freedom is restricted, "I think half the battle is over for them," he said.

But the government doesn't want help from U.S. drones, he said.

"The policy of the government is very clear," Abbas said. "... The government feels it does more harm than it helps."

A peace deal is not an option, according to Abbas. When militants lay down their arms and surrender, "only then it will be accepted you are not fighting," he said.

Pakistani officials said about 10,000 to 15,000 militants linked to the Taliban or to al Qaeda operate in South Waziristan, a harsh terrain familiar to militants but difficult for others to navigate. About 28,000 Pakistani soldiers have moved into the epicenter of Taliban activity in the region to counter their activities, officials said.

Elsewhere in Pakistan's tribal region -- in the Mohmand Agency -- at least eight militants and one soldier were killed on Saturday when they exchanged gunfire near a military checkpost, the military said.

But despite these efforts, insurgents have continued to strike with relative impunity inside Pakistan, brazenly targeting government, police and security locations.

The latest attack occurred Friday in the northern city of Peshawar, when a suicide car bomber detonated near a police station, killing 13 people -- most of them civilians.

The recent wave of deadly attacks has raised concerns about the ability of Pakistan's security forces to maintain control. The attacks heightened internal and international pressure on the government to take swift and effective action.

On Thursday, U.S. President Barack Obama approved an additional $7.5 billion in assistance to Pakistan over the next five years.