(CNN) -- China plans to make "every effort to rescue" a merchant ship and crew hijacked in the Indian Ocean, the country's state news agency reported on Tuesday. 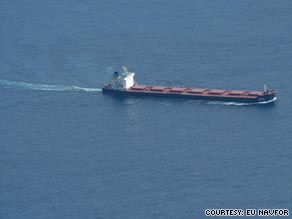 The Chinese-owned bulk carrier De Xin Hai was hijacked on October 19 with 25 crew members on board.

Monday's hijacking is the first of a Chinese ship this year, according to the International Chamber of Commerce's International Maritime Bureau.

Ma said the ministry warned ships and citizens to avoid traveling along waters where the incident occurred, an area not far from the Somalia coast where pirates have seized many vessels. See a live map of hijackings in 2009

"We will watch closely developments in the incident and make every effort to rescue the hijacked crew and carrier," Ma said. There are 25 crew members aboard and they are all Chinese nationals. A European Union official Monday incorrectly said the total of crew members was 146.

See where the ship was hijacked »

John Harbour, a commander with the British Royal Navy who serves with the EU Naval Force, said the UK Maritime Trade Organization in Bahrain called the ship but received no response. An EU force aircraft is monitoring the ship and reported seeing four pirates on deck.

The De Xin Hai is owned by the Chinese Ocean Shipping Company and was carrying coal from South Africa to India, Harbour said.

The ship was dragging two skiffs behind it, much like the kind of skiffs that pirates have been known to use to hijack ships in the waters off Somalia.

All About Piracy Reporting Center • China