KABUL, Afghanistan (CNN) -- Afghanistan's president is downplaying accusations of widespread fraud in his country's recent elections, but he's emphasizing the importance of a runoff for the sake of ensuring peace and stability in his nascent and war-torn democracy. 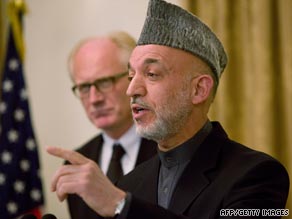 President Karzai announced that there would be a runoff election at a recent press conference.

"We must have a second round," Hamid Karzai said in a taped and exclusive interview for the Fareed Zakaria GPS show that airs Sunday on CNN. "If we don't do that, we would be insulting democracy. And I pledge to respect the vote of the people."

In the first interview since a runoff was announced, Karzai said there were so many claims of widespread corruption in the election two months ago that he started to believe that the voting was fraud-laden. In fact, he said, he too began to doubt the results.

"But three days before I made the decision to call for a runoff, I got convinced that all that was said was mostly wrong," said Karzai, who ran for presidential re-election against several candidates.

Karzai weighs in on McChrystal report »

Last month, final uncertified results showed Karzai with 54 percent of the vote, but a report by a U.N.-backed panel of election monitors said there was widespread fraud in the August 20 presidential election.

The U.N.-backed Electoral Complaints Commission invalidated nearly one-third of Karzai's votes because of "clear and convincing evidence of fraud." Afghanistan's Independent Election Commission then certified the voting results, which gave him less than the 50 percent needed to avoid a runoff.

The fraud claims reverberated politically in the United States, where criticism of the Afghan war gained even more traction when citizens and lawmakers began questioning whether it was worth sacrificing troops to support what they viewed as a corrupt government.

In light of the fraud claims and in the face of Western pressure, Karzai agreed to a November 7 runoff with his main challenger, Abdullah Abdullah.

"Whatever happens, this election must present a clear result, and that result must be respected," Karzai said. "But of course the international community and us, the Afghans, must do everything that we can to make it better, to make it much more legitimate and to make it worthwhile of the effort of the Afghan people."

Asked whether he was pressured into accepting another round of voting, Karzai said that many world leaders called and asked him to accept the ultimate results, but he said those requests weren't the reason he accepted the runoff.

"It was recognizing that Afghanistan had gone through so many years of difficulty, so many years of internal strife backed by foreign players, and I felt as if Afghanistan was entering that period again. I felt as if Afghans were pitching one against the other, and for that reason, and for the reason of safety and security of the Afghan people and as I mentioned earlier, cementing democratic traditions in Afghanistan, I went to agree to a second round, which I believe is good for Afghanistan, which will eventually be good for all of us," he said.

At the same time, Karzai said, the "last election was not as bad as it was claimed; it was a lot better."

"Afghanistan is a poor country, in Western terminology -- a Third World country," he said, observing that it "has gone through years of war."

"The institutions are just young toddlers in this democracy that resembles a toddler. It walks and falls. We have to understand that, and we have to accept the Afghan elections in the context of the Afghan situation and the poverty and lack of means in this country," Karzai said.

Karzai said in the interview that "Afghanistan always had a national unity government" and that "I will have an inclusive government as always."

"Dr. Abdullah did not vote for me in 2004, but I continued to keep him as the minister of foreign affairs for another year and a half," he said, saying he's "known for consensus."

"Well, we have the same question, too," Karzai said, noting that the partnership "is not a one-way street."

Karzai noted that his countrymen have been incensed over civilian deaths caused by international airstrikes.

And, he said, the Pashtun people, among whom the Taliban has much support, can't be "weaned away" from the insurgency if they are under attack, feeling insecure and have no hope for the future.

"The trouble between my government and myself and our allies has been these blind bombardments of our villages, the attacks on our people at night, raiding their homes, arresting them and putting them in prison," he said.

He added he supports Gen. Stanley McChrystal's recent report on Afghanistan that calls for protecting the civilian population. McChrystal is the top U.S. commander in Afghanistan.

McChrystal reportedly is asking for an additional 40,000 additional troops, and Karzai said future numbers would have to be discussed after the election.

He said there's a "strong institutional structure" in the banks, the Finance Ministry and the accounting system.

He also cited improvement in the judicial realm.

"We're a lot better, a lot more capable, a lot more able to deliver justice then we were seven years ago. It will take a lot more in many more years, sir, to get to where we desire to, and for that we must have patience."

Asked about Pakistan's massive ground offensive in Pakistan's South Waziristan region, a sanctuary for insurgents bordering Afghanistan, Karzai said Afghanistan is "fully behind any efforts to remove extremists and terrorists" and said Afghanistan and Pakistan have a "very constructive relationship at present." But he cautioned that the war on terrorism shouldn't be a war on the indigenous people in the region.

"We must make sure that no civilians are hurt, that no Pashtun families, because they happen to be Pashtun and happen to be affected by terrorists who have taken place in their midst, they must not be hurt or affected," he said.

"As soon as the election is over, if I win in that election, I will make sure to enhance that relationship with Pakistan," he said.

Karzai was asked whether the Pakistani military will target another region, North Waziristan, and attack the groups that have been striking Afghanistan.

"I can't predict that. I hope we will be able to conduct an effective campaign against terrorism, making sure that every Taliban are not hurt, because every Talib is not a terrorist, the Taliban are thousands of people in both Pakistan and Afghanistan.

He also disputed charges that many insurgents are inspired by opposition to his government, not global Jihad.

"Well, that sort of story has been going around for some time. I think it's not going to serve anybody in America or NATO to try and make scapegoats out of the Afghan government, or out of the Afghan people. I think we must recognize that we have all made mistakes. Some in Afghanistan, some in the international community. So let's correct those mistakes and lets move forward if we are interested in fighting terrorism effectively," he said.