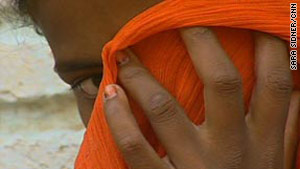 Drought, debt and desperation have pushed some farmers in rural India to sell their wives.
STORY HIGHLIGHTS

Bundelkhand, India (CNN) -- The cattle slowly drag the old-fashioned plow as a bone-thin farmer walks behind, encouraging them to move faster with a series of yelps.