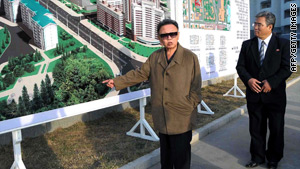 United Nations (CNN) -- Nearly 40 percent of North Koreans are starving, and a shortfall in international aid means that a fraction of those people will receive food donations, a U.N. rights expert said.

Aid has been limited by global reaction to North Korea's recent nuclear and missile tests and the government's priorities are misguided, he said.

"The country is not poor, and yet the money is not spent on the people," Muntarbhorn told reporters Thursday after delivering his latest report before the U.N. General Assembly. "People should be entitled to a fair share of the budget and the benefits from trade in terms of access to sustainable development."

He urged the U.N. Security Council to step up as North Koreans face worsening conditions.

The United Nations regards the North Korean government as one of the most restrictive and repressive in the world. The Security Council has slapped the reclusive nation with multiple sanctions, though the United Nations does not tend to intervene in a country's humanitarian affairs.

"Let's make good use of the international system," Muntarbhorn urged. "I need the Security Council."

Muntarbhorn, who has been denied access to North Korea for six years, described a downturn of human rights in that society, saying that North Koreans live in constant fear of abduction, arrest, abuse and even public execution.

He reported that women continue to be highly discriminated against -- they are barred from trading and are forced to wear skirts and dresses even while bicycling as necessary transportation.

Freedom of information also remains restricted. Communication has progressed somewhat, now that cell phones are legal -- even to the non-elite -- but Muntarbhorn said phones are not permitted near the border. Possessing a computer is illegal for North Koreans.

The North Korean constitution recently was amended to acknowledge human rights, and references to communism were removed, Muntarbhorn said.

However, he said, the government has replaced communism with "their own brand of socialism," which ranks government authority very high and regular citizens very low.

"We can feel that the reference to human right is somewhat undermined," he said.