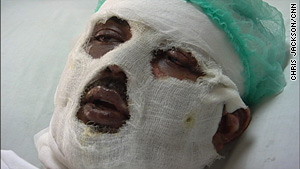 Waqar Khalid, 24, lies in a hospital four days after a suicide bombing wounded him at a Pakistan university.

Islamabad, Pakistan (CNN) -- His legs and arms are wrapped in bandages. His face, shrouded in a mask of cotton.

Waqar Khalid is one of the latest victims of a war that has now spread to Pakistan's schools. The 24-year-old university student lies in a hospital bed, beneath a small printed sign on the wall that lists his name, age and injury. Sixty percent of his body is covered in burns.

One afternoon last week, Khalid walked out of a classroom straight into the fireball of an exploding suicide bomber.

"I saw a man wearing a sky-blue colored suit. Very close. Maybe the distance [was] two feet ... but I didn't think that it will be a terrorist," Khalid says. "When he pushed the button, right at that time, I saw fire. Very high fire. Very much high fire."

Two suicide bombers were involved in Tuesday's attack on Islamabad's International Islamic University. The first bomber hit the cafeteria on the women's side of the campus, killing a cafeteria worker and four students, and wounding 17 other female students.

Khalid and his classmates heard that blast but assumed it was a car tire bursting.

Moments later, the second bomber self-detonated in the hallway on the second floor of the Sharia law department, directly in front of the department chairman's office.

The blast sprayed the walls and ceiling with ball bearings and left two male students dead.

"I thought now I will go to Allah," Khalid says. "But after five minutes I saw that I'm completely -- all parts of my body is with me."

Though horrifically burned, Khalid somehow survived the inferno and stumbled down the stairs.

Five days after the attack, workers were covering up the blood-stained, pock-marked walls at the Sharia law department with mortar and paint. In a few weeks, the building may look as good as new.

Khalid, meanwhile, is battling for his life.

"He's critical at the moment," says Serva Javed, a doctor at the burn center in Islamabad where Khalid is being treated. "We're trying our level best to save his life."

Before the attack, Khalid studied Arabic and English, and dreamed of becoming an interpreter or a teacher working overseas. He also was an active member of the United Students of Islam, a student association that publicly condemned the Taliban.

"We say openly, these are terrorists which are responsible for the Pakistani condition now. These are killing the persons without any reason," Khalid says.

At the Islamic University, professors teach a moderate interpretation of Islam, which challenges the Taliban's policy of violent jihad.

Still, many teachers and students are stunned that their school would become a target of the militants.

"We never expected it," says Parveen Qadia Agha, the vice president of the university. "The reason could be to create chaos and to create psychological warfare," she said, adding that attacking "the least expected places creates more havoc."

In recent weeks, militants have stepped up attacks in Islamabad and the eastern city of Lahore. Targets have included police stations, the headquarters of the Pakistani military, a high-ranking Pakistani army officer, and the office of the U.N. World Food Program.

The waves of suicide bombers come as the Pakistani military's offensive into the Taliban stronghold of South Waziristan enters its second week.

Khalid's eyes flash with anger when asked about the army's campaign against the militants in the mountains.

Khalid's mother Rokhsana, dressed in a flowing purple dress and scarf, holds an agonizing vigil by her son's side. She is worried that her husband, a police officer, may be caught up in the escalating violence around Pakistan.

"No one is safe anywhere, neither at home or in the bazaar or at the hospital," she says.

Despite the horrific extent of his injuries, Khalid is animated, often cracking jokes and waving his bandaged arm in his hospital bed.

"I will join my university when I recover from this injury," he declares.

But he sobers after glimpsing his own reflection in the lens of a camera. It is the first time he has seen his face since the attack.

"I have no courage, no patience to see myself," Khalid says. "This explosion will give me many side effects in the future. But what can I do?... I have to face those things."