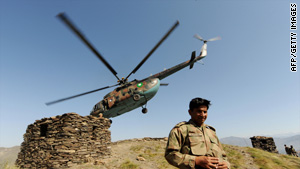 A Pakistani army officer walks down from a hill top after landing in a helicopter in Mingora on June 3, 2009.
STORY HIGHLIGHTS
RELATED TOPICS

The incident occurred in northwestern Pakistan, where Pakistani troops have been fighting Taliban militants.

Senior Pakistani military officials say two pilots were injured in the crash, which occurred around sunset and was under investigation, a military spokesman said.

Speaking on the condition of anonymity, an intelligence source and a local political official said the helicopter was brought down by hostile fire.

The aircraft was traveling to the northwestern city of Peshawar from the border district of Bajaur, where at least 25 people were killed in a suspected drone strike on Friday.

A local official told CNN the missile attack killed the nephew and son-in-law of Mawlanna Faqir Mohammed, the Taliban commander in Bajaur. Mohammed, himself, appears to have escaped the assault.