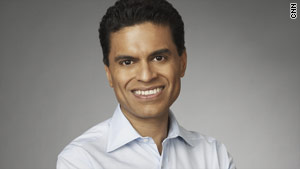 Fareed Zakaria says the United States should test its surge strategy in one part of Afghanistan.
STORY HIGHLIGHTS
RELATED TOPICS

Watch Fareed Zakaria's interview with Matthew Hoh, a U.S. foreign service officer who resigned over the war in Afghanistan, on "GPS" at 1 and 5 p.m. ET on Sunday.

New York (CNN) -- A top Taliban political leader delivered a message Friday to U.S. President Obama, calling his attempt to lure away Taliban fighters with money "an old weapon that has failed already."

"The Mujahideen of the Islamic Emirate of Afghanistan are not mercenaries and employed gunmen like the armed men of the invaders and their surrogates," Mullah Brader Akhund said in the statement. "This war will come to an end when all invaders leave our country and an Islamic government based on the aspirations of our people is formed in the country."

Obama is considering whether to approve the request from his top commander in Afghanistan, Gen. Stanley McChrystal, for as many as 40,000 additional troops. The decision is being weighed against the backdrop of suddenly spiraling U.S. military fatalities. Fifty-six American troops have died in Afghanistan in October, the highest U.S. monthly toll since the war began eight years ago.

CNN spoke to Fareed Zakaria, anchor of "GPS," about the situation in Afghanistan.

CNN: Should the United States be sending more troops to Afghanistan, as Gen. McChrystal is requesting?

Fareed Zakaria: A lot of people are arguing in support of this "surge," but it is actually the third surge in Afghanistan.

President Bush described this policy as "the quiet surge," and he made the standard arguments about the need for a counterinsurgency capacity: The troops had to not only fight the Taliban but protect the Afghan population, strengthen and train the Afghan army and police, and assist in development.

In January 2009, another 3,000 troops, originally ordered by President Bush, went to Afghanistan in the first days of the Obama presidency. In February, responding to a request from the commander in the field, Obama ordered an additional 17,000 troops into the country.

In other words, over the past 18 months, troop levels in Afghanistan have almost tripled. An additional 40,000 troops sent in the next few months would mean an almost 400 percent increase in U.S. troops since 2008.

CNN: But didn't the surge strategy work in Iraq?

Zakaria: Yes, but the surge in Iraq was just over 20,000 troops, not the numbers we are seeing in Afghanistan. President Obama is actually smart to examine why previous increases have not worked in Afghanistan and why we think additional ones would.

There are many areas that are sparsely populated and very hostile to outsiders, and thus counterinsurgency may just not make sense.

CNN: So is Gen. McChrystal wrong in asking for more troops?

Zakaria: No. Gen. McChrystal is tasked with bringing stability to Afghanistan and is understandably very concerned about achieving success there. But he is responsible only for that region, and naturally he wants more resources for it.

President Obama, on the other hand, is responsible for America's interests across the world. And he must decide whether the dangers there and America's interests justify putting much of the American Army into Afghanistan and spending hundreds of billions of dollars to avert the potential threats out of there.

There are, after all, other threats coming out of Pakistan, coming out of other parts of the world and other opportunities that he has to worry about.

CNN: So if you were advising Obama, what would you advise?

Zakaria: I would suggest we test Gen. McChrystal's "surge" request. Let's pick an area, put in enough troops in there, clear out the bad guys and then -- crucially -- begin transferring power to the Afghan army and the Afghan authorities.

This is the clear, hold and build sequence. If it works, expand the area where we do it. This tests the proposition without the huge troop commitment.

CNN: What about the areas not in the "test" region?

Zakaria: There I would advocate what Tom Ricks, the defense expert, suggests. "Why not do the Petraeus plan [counterinsurgency] for the major population centers and the Biden plan [counterterrorism] for the rest of the country?" That sounds like a middle course that is smart and practical, which might need some more forces or perhaps can make do with the almost 100,000 already there.