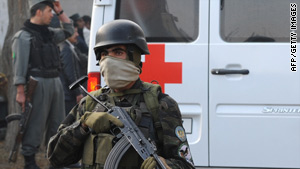 Among the six in custody was a religious teacher from a local mosque, Mulla Qari Aminullah. He was arrested Thursday in Medina, Saudi Arabia.

Ansari said Aminullah, from Ghazni province, is accused of hiding the three attackers in his Kabul home.

National security staff arrested Aminullah at Medina's airport as he was heading to the annual Hajj pilgrimage, Ansari said.

U.N. Secretary-General Ban Ki-moon said Friday that two of the U.N. personnel who died in Wednesday's attack by Taliban gunmen were helping the Afghan government plan for the November 7 runoff election.

Two of the other victims were security staff; the fifth had not been identified.