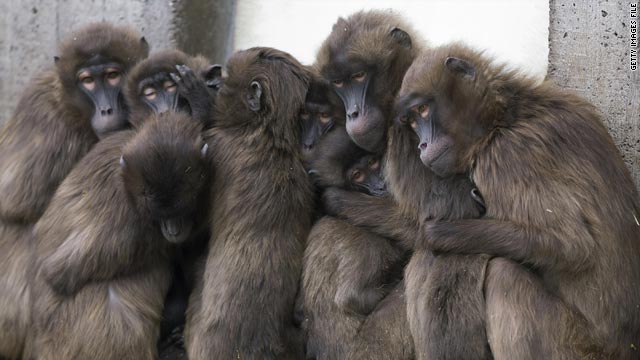 Researchers are finding that monkey group behavior and Wall Street brokers have a lot in common.
STORY HIGHLIGHTS

In Indonesia, researchers have watched how long-tail macaques trade for sex. In South Africa, vervet monkeys climbed the ladder of their social group by learning a new trade in apples.

This line of study examines how economic models explain social behavior in the natural world.

"Animals neither negotiate verbally nor conclude binding contracts, but nevertheless regularly exchange goods and services without overt coercion and manage to arrive at agreements over exchange rates," European researchers wrote in a recent paper on market behavior among vervet monkeys in South Africa.

"It's really looking at the economy of nature," said Michael David Gumert, a primatologist and assistant professor in the division of psychology at Nanyang Technological University in Singapore. Gumert spent 20 months in the jungles of Indonesia studying long-tail macaques, observing the mating market among the monkeys.

While the U.S. dollar may be the primary global currency among humans, in the primate world coinage can be best called "The Groom" -- the more time you get being groomed, the richer you are within the monkey social group, researchers have observed.

Gumert found that male monkeys "pay" for sex by grooming female monkeys. After being groomed, females would mate nearly four times an hour with the groomer, and are less likely to mate with others. But the larger the market of male companions, the higher the price of sex: Areas with low density of males, the price was only eight minutes of grooming. In areas where there were more males, the price could double to 16 minutes.

Sex isn't the only commodity for sale in the jungle. Female macaques will line up to groom a new mother in order to hold her offspring, Gumert observed. "When a mother has a baby, the other females are attracted to the baby and want access to it," he said.

The findings support the "biological market theory," a term created by researchers Ronald Noe and Peter Hammerstein in trying to understand reciprocal behavior in primates and the unwritten code of trade that appears in the wild.

"(My colleague) said, 'this looks like a market', and we started investigating in those terms," said Noe, a primate ethologist at the University of Strasbourg.

And like in capital markets, supply and demand rules the jungle. In one recent experiment led by Noe's student, Cecile Fruteau, in South Africa, a low-ranking vervet monkey in the wild was trained to open a box of apples for the group. Instantly, the stock value of the monkey shot up.

Then the researcher trained another low-ranking monkey the same skill to see what competition would do in the monkey market. And like human markets, the duoply reached a point of equal distribution of grooms.

What fascinates Noe is that without any sort of outward system, there seems to be an innate sense among the group of the value of these new goods and services.

"They make the changes very quickly and seem to have a keen sense of what it is worth," he said.

There may be other forms of currency trading hands that the researchers can't compute -- such as greater tolerance among each other when feeding, or stored knowledge that the improved relationship will come in handy in a fight.

"Grooming is something that is consistent and we can easily measure," said Noe.

Researchers stop short of saying this research has -- so far -- signaled that economics is an innate trait in our closest animal cousins, but it raises thought provoking questions if there is an evolutionary dynamic to the forces that gave rise to Wall Street.

From an evolutionary standpoint, the tacit negotiation that happens in primate groups suggests that the maxim that "only the strong survive" isn't quite right, Gumert said. "It seems really more like, 'only the cooperative survive'."