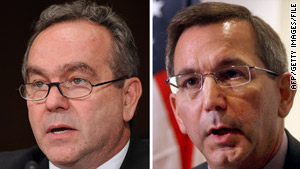 Assistant Secretary of State Kurt Campbell and deputy Scot Marciel plan to meet with Suu Kyi Wednesday, a spokesman at the U.S. Embassy in Myanmar said.

The visit is part of a new shift in U.S. policy toward Myanmar.

U.S. Secretary of State Hillary Clinton announced in September that the United States will try to directly engage with the military leaders of Myanmar, also known as Burma, without abandoning its existing sanctions on the southeast Asian country.

Suu Kyi's detention has been a key component in America's political tangle with Myanmar. Critics of the country's ruling junta have accused the regime of convicting Suu Kyi, 64, to keep her from participating in 2010 elections.

Suu Kyi, a Nobel Peace Prize laureate, has been confined in her house for about 14 of the past 20 years. She was sentenced to 18 more months of house arrest after John Yettaw, an American man, swam uninvited to her home in Yangon where she has been confined.

Suu Kyi has accepted the new shift in U.S. policy toward Myanmar, her spokesman said.

It was unclear if the two diplomats would meet with members of Myanmar's military junta.

In August, U.S. Senator Jim Webb became the first American official to meet with Myanmar's junta leader, Senior Gen. Than Shwe, when he went there to secure Yettaw's release.