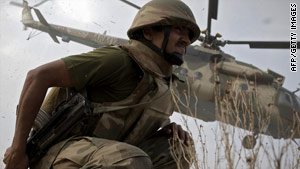 Islamabad, Pakistan (CNN) -- Pakistan's military said Tuesday that its forces have taken over a Taliban stronghold during the ongoing ground offensive in the tribal region of South Waziristan.

According to the military, 21 militants and one Pakistani soldier died in the past 24 hours of fighting -- most of them in the raid on Sararogha. The military is trying to rout Taliban insurgents operating along the Pakistan-Afghan border.

The restive and largely ungoverned region of South Waziristan is the headquarters of the Pakistani Taliban.

Pakistan's military suspects its leader, Hakimullah Mehsud, is still in the region backed by up to 8,000 militant fighters.

Pakistan's army has launched three similar offensives in Kaniguram and Sararogha since 2004 without success, sometimes agreeing to peace deals that eventually fall apart.

Army spokesman Maj. Gen. Athar Abbas recently told CNN that this time a peace deal is not an option.

"Certainly there is no scope of a peace deal," Abbas told CNN. "It is a fight to the finish."

The military began its ground offensive in South Waziristan three weeks ago, however the region has been affected by a broader anti-Taliban offensive that has uprooted more than 180,000 people this year, according to the United Nations. Many of those people -- more than 94,000 -- have fled South Waziristan since June, the U.N. said last week.

In recent weeks, Pakistan has been relentlessly rocked by a wave of attacks as Islamic militants retaliate against the military campaign.

On Monday, the Pakistani cities of Lahore and Rawalpindi were hit by separate suicide bombings. A suicide attacker believed to be on a motorcycle targeted people outside a bank in Rawalpindi who were lined up to pick up their monthly checks, police said. That attack killed 30 people, police said on Tuesday.

The attack happened in the Cannt area of Rawalpindi, close to Pakistan's military headquarters where the top U.S. commander in Afghanistan, Gen. Stanley McChrystal, was meeting with Pakistan's army chief Gen. Ashfaq Parvez Kayani on Monday. It was unclear if he was there at the time of the attack.