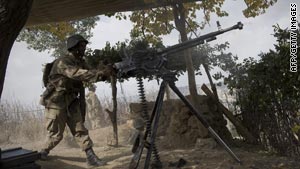 Islamabad, Pakistan (CNN) -- A spokesman for Pakistan's Taliban claims the militants are making a tactical withdrawal from their stronghold of South Waziristan, in response to a two-and-a-half week long Pakistani military offensive.

The purpose of the move is to conserve resources and to wait out the military's advance until the cold weather sets in by January, said Azam Tariq, a Taliban spokesman, in a phone call with CNN.

Then, Tariq added, the Taliban will launch a guerrilla war against the Pakistani army in areas far beyond South Waziristan.

The spokesman denied military claims that the Taliban had suffered scores of casualties in the latest offensive. Instead, Tariq told CNN, his fighters killed "more than a thousand" Pakistani security forces.

The Pakistani army attacked South Waziristan on October 17. The generals have since claimed to have killed dozens of Taliban militants and captured the hometown of militant leader Hakemullah Massoud.

According to a military press release, 30 militants were killed while eight officers were wounded in another day of fierce fighting, which included street to street fighting in the South Waziristan town of Ladha.

It is not possible for CNN to confirm these reports. Pakistani authorities have barred foreign observers, humanitarian workers and journalists from traveling to the conflict zone, with the exception of several highly-organized visits provided with military escorts.

More than 160,000 civilians have fled the fighting. Aid organizations are sounding the alarm about untold numbers of civilians who they fear may still be trapped in the conflict zone.

Taliban commanders in Pakistan have communicated with the media in recent months, primarily by telephoning Pakistani reporters working in and around the country's troubled border regions. Public support for army offensive

The Pakistani army enjoys "cautious" popular support in its battle against the militants, says one of the country's most respected pollsters.

According to a poll released this week by the Gilani Research Foundation, which is the Pakistani affiliate of Gallup International, 51 percent of Pakistanis surveyed said they supported the army's latest offensive against the Taliban.

Thirteen percent of those surveyed opposed the military operation, while the remainder said they were unsure.

However, a majority of Pakistanis polled blamed either the United States (35 percent) or the Pakistani government (31 percent) for the crisis in South Waziristan.

"Only a minority blames (25 percent) blames the Taliban for what has happened," said Dr. Ijaz Gilani, who organized the poll. "America continues to be seen as a threat. So support for the military operation does not mean a change in attitude towards the United States."

Last week, U.S. Secretary of State Hillary Clinton faced heated criticism and suspicion from journalists, businessmen and university students during what was supposed to be a three-day charm offensive in Pakistan.

Many Pakistanis blame the United States and its war in neighboring Afghanistan for the violence in Pakistani border regions, and for the wave of deadly bombings that have killed more than 250 people in Pakistani cities over the past month.

The Gilani Research Foundation reports 39 percent of Pakistanis polled believed the conflict in Pakistan is actually America's war. Thirty-seven percent called it "Pakistan's war," and 22 percent said the conflict was in the interest of both Pakistan and the United States.

"In my own interpretation, it is 'cautious support' [for the army offensive]," concluded Gilani. School teachers killed

A local government official said the two teachers were leaving their school in a rickshaw when armed attackers opened fire on their vehicle, killing the teachers and wounding two accompanying male relatives.

The army launched an offensive to clear Taliban militants from Bajaur more then a year ago. But clashes in the border region continue. Last month, a suspected drone strike killed several relatives of a local Taliban commander in that district.