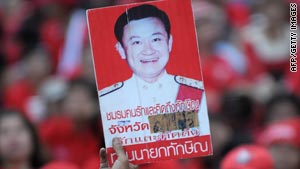 A protester holds aloft a poster of former Thai PM Thaksin in a recent demonstration in his support.
STORY HIGHLIGHTS

Along with recalling the ambassador, the Thai government will review further relations with Cambodia, the Thai Ministry of Foreign Affairs said.

Thaksin, a billionaire businessman who served two terms as prime minister, was ousted in a bloodless coup in 2006. He fled Bangkok last year while facing trial on corruption charges that he said were politically motivated.

Though he has fled the country Thaksin remains a controversial figure in Thailand and there have been violent clashes in the country between pro and anti-Thaksin groups.

Cambodia's hiring of Thaksin is an interference in Thailand's internal and judicial affairs, a Thai Ministry of Foreign Affairs statement said.