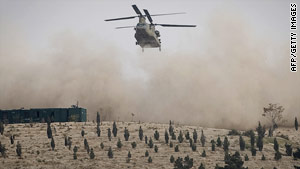 The search for the two missing U.S. soldiers is continuing in Badghis province.
STORY HIGHLIGHTS

KABUL, Afghanistan (CNN) -- NATO forces in Afghanistan are investigating a report that a NATO airstrike killed Afghan security forces in a region rife with arms smuggling and narcotics trafficking.

This is where NATO forces have launched a search for two American paratroopers who went missing Wednesday during a "routine resupply mission."

ISAF and Afghan security forces personnel casualties were reported on Friday in several incidents during the search operation, a statement from ISAF said.

In another incident in Badghis nearly two weeks ago, seven U.S. service members and three U.S. Drug Enforcement Administration officers were killed in a helicopter crash in the province.

Low visibility was cited as the cause of the crash.