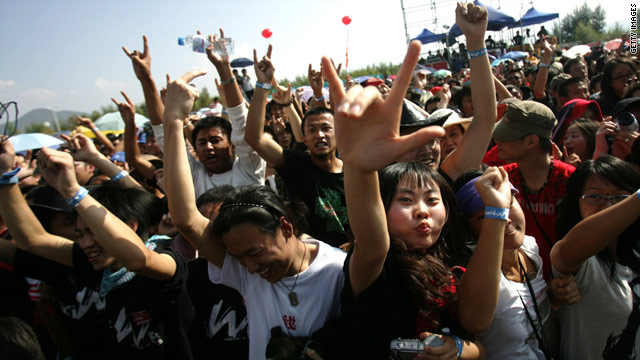 The bands, along with a gaggle of other musical outfits, will hit nine cities -- from New York to Chapel Hill, North Carolina -- as they embark on their first official tour of the United States.

The bands, led by Maybe Mars music label co-founders Charles Saliba and Michael Pettis, want to expand their fan base and make waves with Chinese rock. More importantly, they hope to change the reputation of the Chinese music scene, transforming it from purely experimental to the capital of the "next big thing."

Yan Haisong, P.K.14's frontman, was excited and nervous before the group departed on the two-week tour. He rattled off a list of sites he hoped to see in New York, including several record shops to pick up a few LPs. As he arranged his luggage for check-in at Beijing Capital Airport last week, Yan said P.K.14's music was heavily influenced by what the New York scene has produced and hopes his band can bring a bit of Beijing to the Big Apple.

"We're going to play to a different audience and we don't know if they can accept us, especially as we will sing in Chinese, so we don't know," he said.

If buzz is any indication, Yan Haisong has nothing to worry about. The bands' arrival has generated healthy anticipatory chatter on popular American music blogs and in the media, from Time Out New York to the Village Voice. Reporters and music junkies heaped on pre-show praise, with Time Out calling the tour a "roster of artists" that is "currently at the forefront of a national movement, pushing contemporary Chinese rock toward international acclaim."

Considered to be largely underground and experimental, the Chinese rock 'n' roll scene has come a long way and is expanding fast. Just five decades ago, popular Chinese music was constricted to revolutionary songs and ballads approved by the government. Today, the scene has opened dramatically, welcoming in a variety of genres ranging from classical to heavy metal.

In fact, young Chinese flock to Beijing with dreams of making it big at small but influential clubs like D-22, the sister club of record label Maybe Mars. Run by Pettis and Saliba, D-22 is Beijing's hottest venue for up-and-coming Chinese bands, nestled in the northwest university district. This is where music lovers come to find fresh talent and where young Chinese rock 'n' roll is born.

Ricky Sixx, a young Chinese rocker sporting lace-up leather pants and teased out long hair, moved to Beijing from a small town in Hebei Province in search of a thriving rock scene.

"In my hometown, we just have one bar. It's so small, and so little people would come," he said.

Just a few months after his arrival, Sixx is considered one of talents to watch at the club -- perhaps the next generation's version of the Carsick Cars, a group considered to be the most successful band from D-22, having captured international fans and toured with Sonic Youth in Europe.

Only two years after the band's first album debuted, Carsick Cars today serves a gateway band by which many Americans appreciate Chinese rock 'n' roll. Back in China, Carsick Cars performs what label Maybe Mars says is "the anthem of Chinese countercultural youth" for its juxtaposition of catchy pop and lightly politicized social commentary.

Sixx is also reaching for the stars, telling CNN he and his band recently played in the finals of the Pepsi Battle of the Bands in Shanghai, angling for a spot to perform in Hong Kong and win a recording contract. Saliba, of Maybe Mars, is also developing the young rocker, calling him one of the freshest new talents in Beijing.

"There is a lot of amazing music being made. I'd say probably more exciting than most cities in the world," Saliba said.

However, there are also stereotypes to combat in the rapidly growing rock scene in Beijing. China has long been known for imitating Western trends from handbags to cars and even pop stars. Mainland pop music has been derided as uninventive and uninspiring, fraught with lip-synching and intense focus on image rather than music.

Nowadays though, innocuous Mandarin pop (or "Mandopop") and popular karaoke bars are no longer the only sounds in town. The rock scene is heating up, and it is fiercely original.

"We learned a lot by imitating," said Cui Jian, one of China's most famous rock stars. "But we have our own problems, our own feelings to express, so we've started making our own music."

Cui Jian is widely considered the father of Chinese rock and roll. More than 20 years since he launched his own ground-breaking career, he is trying to encourage today's young bands to be innovative and experimental with their music.

Leading a musical counterculture that is redefining what it means to be "Made in China," Cui is headlining a new show on MTV China to promote higher standards in the music industry by discouraging lip-synching and promoting his favorite up-and-coming bands.

Back across town at D-22, Charles Saliba and Michael Pettis are doing the same. To date, their record label Maybe Mars has signed 24 bands that they believe have real potential in the Chinese rock-and-roll market.

"You're looking for something that to you at least sounds new and is not a copy or a photocopy, and that's really hard," Saliba said. "I mean it's like discovering a color."

Whether China's new "color" of rock and roll will make it big in the U.S. during this tour remains to be seen, but there is no doubt that Chinese rock 'n' roll is here to stay.