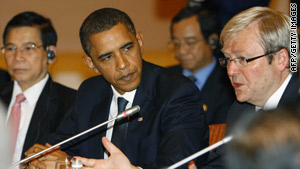 Singapore (CNN) -- Big promises, no international climate deal and consensus that pulling the plug too quickly on stimulus spending could undermine the global economic recovery -- those are the key results (or lack thereof) from the APEC summit, which wraps up Sunday in Singapore.

APEC -- with 21 member nations representing more than half of the world's economic output -- made a laundry list of pledges at this year's summit. Some were vague and ambitious, others specific yet still vague.

Among the vague and hopeful: APEC pledged to pursue growth that is balanced, inclusive and sustainable.

Among pledges that were specific, yet vague because of lack of clear ways to measure progress: APEC will try to reach, by 2015, "a collective 25 percent reduction in the cost, time and number of procedures that our businesses face when starting a business, getting credit, enforcing contracts, dealing with permits and trading across borders."

Already, Americans are helping achieve sustainable growth by saving more and spending less, paying down their credit-card debt, and putting business balance sheets in order, Obama said at an APEC retreat session for world leaders. And the United States is reforming its financial system to avoid future derailing, the president added.

"Of course, even as we pursue a strategy for balanced growth, we must also pursue growth that is sustainable -- for our planet and future generations," Obama said.

Only, APEC punted on reaching agreement on cutting greenhouse emissions, just as Group of 20 nations -- the world's leading economies -- did earlier this month.

More promises: APEC and G20 Leaders have pledged to drive hard toward such an agreement at a climate-change summit in December in Copenhagen, Denmark.