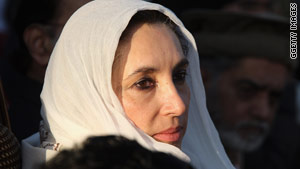 Benazir Bhutto at a campaign rally in Rawalpindi minutes before she was assassinated on December 27, 2007.
STORY HIGHLIGHTS
RELATED TOPICS

ISLAMABAD, Pakistan (CNN) -- A United Nations commission investigating the assassination of former Prime Minister Benazir Bhutto said Tuesday that it met with Pervez Musharraf, the military ruler who was in power at the time.

"The Commission of Inquiry had a frank, open and cordial conversation with former President Musharraf, having been able to pose to him many queries on issues central to its mandate," the group said in a statement.

The statement did not say where the team met with Musharraf.

"While I met the team, I strongly oppose any international probe into Pakistan's domestic affairs," Musharraf said in a statement, carried by Dawn.

The U.N. commission arrived in Pakistan in July to look into the circumstances surrounding the assassination of Bhutto.

The former prime minister returned home in 2007 from a eight-year self-imposed exile to participate in the country's general elections.

She was killed at a rally in the city of Rawalpindi on December 27 when a bomber blew himself up near her limousine. Videotape showed a gunman firing toward her vehicle as she left the rally.

Musharraf's government and the CIA contended the killing was orchestrated by Baitullah Mehsud, a leader of the Pakistani Taliban with ties to al Qaeda.

But nationwide polls found that a majority of Pakistanis believe Musharraf's government was complicit in the assassination.

Her party, the Pakistan People's Party, went on to win the most number of seats in elections held the following year.

Zardari asked the United Nations to look into his wife's death to try and reconcile inconsistencies of how she died and who was behind the attack.

This, despite an inquiry by London's Scotland Yard ruling that Bhutto died from the blast and not gunfire.

The U.N. commission said in its statement that it has met with "dozens" of people in the course of its fact-finding mandate.

It is expected to submit a report to U.N. Secretary-General Ban Ki-moon by year's end.