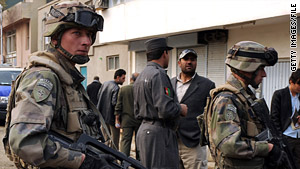 Twenty-six militants have been captured, and eight have been killed, with most of them senior leaders in the Taliban and the Haqqani network, according to a news release issued by NATO's International Security Assistance Force.

The militants -- "known for leading the planning and undertaking of deadly attacks" against civilians, government officials and soldiers -- were captured or killed between August 20 and October 17, the force reported. The insurgents also facilitated the "trafficking of fighters, weapons, explosives and money to support their terrorist activities," the force said.

The force did not explain under what circumstances the militants were killed or detained.

Among the dead are Mullah Farid Fazil Lang, who is accused of planning and participating in attacks against Afghan and ISAF soldiers, the force said.

Lang, who commanded a cell in charge of preparing roadside bombs, was involved in the kidnapping of New York Times reporter David Rohde in November 2008, the force said.

Rohde was snatched outside Kabul, Afghanistan's capital, but was later held in Pakistan. He escaped in June after seven months in Taliban captivity.

Among the detained were Karim Shakan and Matiullah, the force said.

Shakan, a Taliban commander, assisted in the "movement and use of IEDs," or improvised explosive devices. He recruited local Afghans for the insurgency and preached anti-government messages," according to the force.

Matiullah served as an Afghan national police officer in Parwan province, just north of Kabul, when he was linked to insurgents, the force said. He was accused of passing on information to the insurgency.