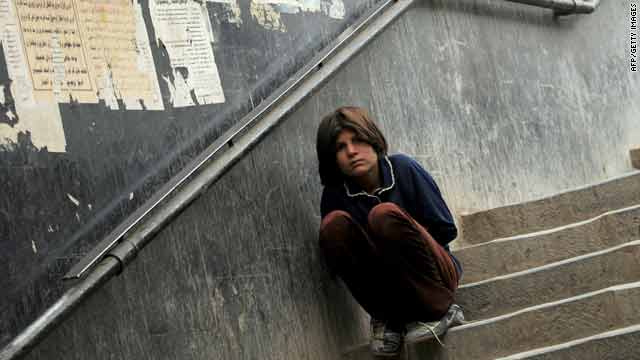 An Afghan child begs on the streets of Kabul on Sunday.
STORY HIGHLIGHTS
RELATED TOPICS

(CNN) -- In his work for a humanitarian agency in Afghanistan, Lex Kassenberg asks an important question when he visits schoolchildren: What will you do when you grow up?

"I want to be president," is an answer Kassenberg often hears from girls.

But for all the admiration Kassenberg has for a youngster's ambition, the 53-year-old CARE aid worker knows that in Afghanistan, the notion of a female national leader remains implausible in the immediate future. Only recently, women had suffered serious setbacks under the rule of the militant Taliban.

The importance of education, especially for girls, does not escape the Afghan people nor humanitarian agencies trying to improve their living conditions. That's why the World Bank partnered with CARE to investigate how education can succeed amid increasing violent attacks on Afghan schools.

"Knowledge on Fire," CARE's education report released Monday, found that community-based schools are the most viable in beleaguered Afghanistan.

"Education-related violence is an alarming trend in Afghanistan," said Helene Gayle, president of CARE. "But this study suggests that an approach of building support for education at the local level can reduce the risks of attacks."

Because government schools are often associated with a Kabul administration viewed by the Taliban as a puppet of the United States, they are prone to being attacked, Kassenberg said. And schools built with reconstruction dollars are associated with the military.

"It's the buy-in from the people in the community," he said.

Between January 2006 and December 2008, 1,153 education-related attacks or threats were reported in Afghanistan, according to CARE. Such attacks have been on the rise since 2005. Last year, the number of incidents almost tripled to 670.

CARE has been working in Afghanistan since 1961 and implements education projects in 10 provinces to build community and government capacity for schooling.

Arson is the most frequent form of attack -- school buildings and tents razed to the ground. But schools have had rocket-propelled grenades lobbed into their compounds and this year, the United Nations documented 16 incidents of bombings on school premises.

Scores of Afghans, including young students, have died in such attacks.

Only 20 percent of Afghanistan's schools are for girls, but they suffered 40 percent of the attacks, an indication that much of the violence is gender-based, Kassenberg said.

"Stop teaching and running the girls' school. Otherwise you will be slaughtered." That was the message sent to a headmaster in Logar, just south of Kabul, when masked gunmen yanked him from his house one evening and beat him up.

"Boys are the shining diamonds of a family," Kassenberg said.

But Kassenberg has noticed that appreciation for girls rises once he sits down to discuss gender bias with fathers. "Where does the education of your child begin?" he asks. "With their mother."

Often, the men ponder the point. "Fair enough," they tell Kassenberg. "We never thought of it that way."

Raising awareness at the community level is key to fostering local support for schools and getting local leaders trained in risk reduction strategies, Kassenberg said, citing the new study. Not involving the community in the establishment of a school is an invitation to danger.

The CARE study comes as the U.S. Congress debates passage of the International Violence Against Women Act, which would create a comprehensive strategy to reduce abuses against women worldwide. It includes the training of teachers and administrators on the prevention of violence against girls and women in educational institutions.

Kassenberg hopes the CARE study will help push Afghanistan along in its uphill climb in educating its people. And that one day, presidential ambition will become a lot more than a little girl's dream.