Philippines region on alert after massacre 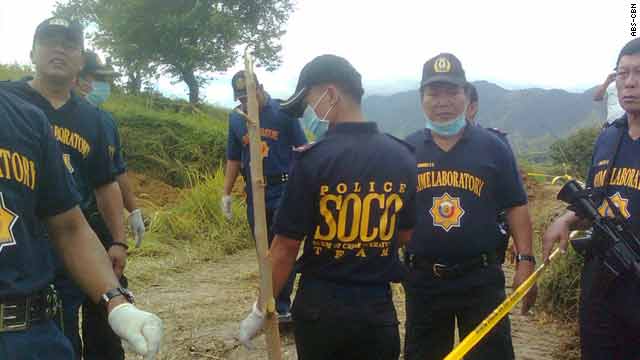 Police investigate where the bodies were found in Maguindanao, Philippines.
STORY HIGHLIGHTS

Manila, Philippines (CNN) -- The Philippines government has increased security in the southern region of Maguindanao after gunmen kidnapped and killed at least 22 people, according to military officials and the country's national news agency.

Some of the bodies were beheaded, according to Filipino media. The details suggest the daytime abductions were politically motivated, and the military said the gunmen were loyal to the province's incumbent governor.

Those killed include a gubernatorial candidate's wife and one of his sisters, according to two of his family members who spoke on local television. The death toll also included at least 12 journalists, according to Reporters Without Borders, a media freedom organization.

Ismael "Toto" Mangudadatu wanted to run for governor of Maguindanao province in May but had received threats he would be kidnapped if he filed the candidate nomination papers himself. He sent his wife and sisters to file the papers, thinking "that women would have some protection," journalist Maria Ressa told CNN.

"It was supposed to be a media event," Ressa said, "[to] let the public know that this politician would run for governor."

Army officials said 100 gunmen surrounded the group of about 40 people -- many local journalists and women among them -- and ordered them out of their vehicles. They took the hostages to a mountainous region, officials said.

Some of the women were raped and tortured, according to media reports.

The military confirmed finding 22 bodies, some of them reportedly beheaded.

"Never in the history of journalism have the news media suffered such a heavy loss of life in one day," Reporters Without Borders said of the 12 journalists reported dead.

The military has said the gunmen are loyal to Maguindanao Gov. Andal Ampatuan, who has held control of the area for the past decade and is a longtime ally of President Gloria Macapagal-Arroyo.

Neither Ampatuan nor his advisers have commented on the allegation.

Maguindanao is a province in Mindanao, a Muslim autonomous region out of the control of the central government. The Philippines government said it increased security in the region after the attacks.

Jesus Dureza, an adviser to Macapagal-Arroyo, called the slayings "a gruesome massacre of civilians unequaled in recent history."

Dureza, Macapagal-Arroyo's adviser on Mindanao affairs, has asked the government to place Maguindanao province under a state of emergency.

Elections in the Philippines have long been marred by violence, but Monday's abductions and killings shocked the nation. Macapagal-Arroyo condemned the killings and ordered more Filipino troops to the region to bolster security, according to the Philippines News Agency.

She also ordered the Armed Forces of the Philippines "to conduct immediate and relentless pursuit of the perpetrators [and] to secure the affected areas," the agency reported.

Military checkpoints are being set up as part of the security effort, state media reported.

Aid agencies operating in the region have long complained about a climate of fear in the region, where the government has little control and private armies operate freely.

Reporters Without Borders said it has been outspoken in criticizing "the culture of impunity and violence in the Philippines, especially Mindanao."

"This time, the frenzied violence of thugs working for corrupt politicians has resulted in an incomprehensible bloodbath," the organization said. "We call for a strong reaction from the local and national authorities."