Government will not open Bhopal plant as memorial 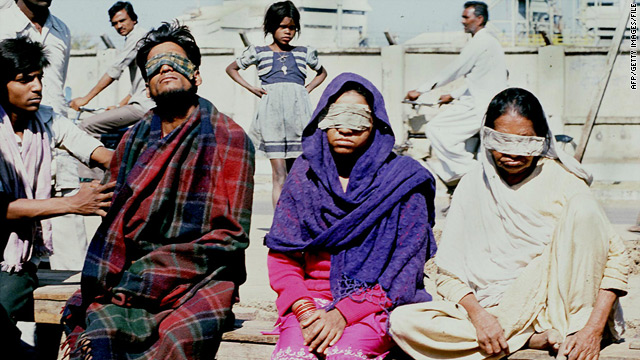 Victims blinded by methyl isocyanate gas are attended to outside the Union Carbide plant after the disaster of December 3, 1984.
STORY HIGHLIGHTS
RELATED TOPICS

(CNN) -- It was to be a somber memorial, a remembrance of those who perished in a lethal milky fog.

To mark the 25th anniversary of the world's worst industrial disaster, authorities planned to open up the now-dilapidated shell of the Union Carbide fertilizer plant, where in the wee hours of December 3, 1984, 40 tons of methyl isocyanate gas oozed out onto the sleeping city of Bhopal, India.

About 4,000 people died instantly in the toxic leak, an event that came to be marked each year with disputes over victims' rights and government accountability.

On this year's milestone anniversary, a new controversy has stirred.

The state government of Madhya Pradesh planned to temporarily open the long-silent plant -- surrounded by concrete barriers and barbed wire -- to the public. It was to be part of a series of events observing the tragedy.

Because everyone wanted to see, to know. For the same reason that a person visits a Nazi concentration camp or ground zero in New York.

"Everyone wants to see the world's worst industrial disaster," said S.R. Mohanty, the secretary for the Relief and Rehabilitation Department for the Bhopal gas tragedy.

It was going to be the government's way of reassuring its people that the plant no longer posed a threat to society.

But the move sparked protests from victim rights groups and environmental activists. Just days before the anniversary, government officials backed away from the plan they had recently announced.

The official reason, however, had little to do with the gas leak.

Mohanty cited an election rule currently in force that prohibits acts that could be construed as attempting to influence voters ahead of the polls. Bhopal's municipal elections are scheduled for December.

The plant could still be opened at a later date.

Though officials representing the government of the state of Madhya Pradesh maintained the Union Carbide plant is perfectly safe, their plans drew criticism.

Activists who advocate for Bhopal's victims viewed the plant tours as a publicity stunt for the government. It was another way to shirk responsibility, said Rachna Dhingra, an activist with the Bhopal Group for Information & Action, a coalition of agencies that advocates for victims.

"They knew about the elections a month ago," Dhingra said, noting that on the 25th anniversary the government wanted to divert attention from the real issues.

Thousands of people still suffer from exposure to the deadly gas and from land and water that became contaminated. Activists contend that neither Union Carbide nor the Indian government has done enough to help survivors.

In the years since the poison cloud enclosed Bhopal, thousands more have died of contamination-related illnesses. The International Campaign for Justice in Bhopal alleges that survivors have received an average of only $500 each in compensation. Those who are drinking contaminated water or children who were born with birth defects have not received any money, the coalition said.

Union Carbide, which was bought by The Dow Chemical Co. in 1999, has said it has no liability left in the disaster after it paid the Indian government a $470 million out-of-court settlement in 1989. The company has said it believes the leak was an act of sabotage.

Dhingra said plans to open the plant to the public was disrespectful to Bhopal's gas victims. The government, she said, was eager to showcase the city as a shining example of recovery.